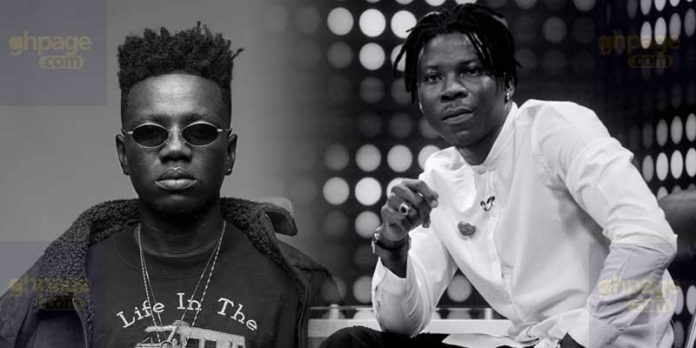 Bhim Nation boss, Stonebwoy has explained why he has refused to pay Vacs; the producer of ‘Mane Me’ and why he chose to unfollow him o Instagram.

Just a month ago, music producer, Vacs, producer of Stonebwoy’s ‘Mane Me‘ song expressed his displeasure for the reggae/dancehall artiste not paying him for the beat to the song and it seems he is not giving up the chase to get his money.

According to Vacs who revealed that all he got was a credit and an acknowledgement on the cover of the album, Epistles of Mama, but apart from that, there has been nothing like appreciation nor money from him.

Read also: ‘Stonebwoy unfollowed me after he refused to pay for ‘Mane Me’ beat’ – Producer Vacs

Speaking to Andy Dosty on Hitz FM’s Daybreak Hitz, the “Bawasaba” hitmaker explained that he is very surprised at what the young man is doing; going around trying to tarnish his image with all these accusations.

According to Stonebwoy in the interview, he has never seen or met the producer in question and explained that he was not in direct contact with all the producers who worked on his EOM album since he left all the work to Mix Master Garzy to do.

Which means Master Garzy was the one who mastered all the beats he took from the various producers hence, he didn’t even know about this producer until this recent happenings.

Read also: Pay me for “Mane Me” beat and stop sharing screenshots of our conversation – Vacs tells Stonebwoy

“God Knows I Don’t Owe You; All I Did Was To Give You A Big Song On Your Beat And You Had To Ride On That. This Is Not The Neat Way To Demand Something From Me. Ask All The Big Producers What They Do And Learn From Them. You Came Into My Instagram DM And How Do You Drag My Name In The Mud. If I Unfollow You, How Does It Hurt You? If You Demand Anything From Me, Come In A Better Way.”

When asked if he has tried to sort things out with this producer in question, Stonebwoy made it clear that even though the guy has messaged him, he hasn’t replied yet because there’s no point since he has already placed some perceptions in the minds of people.
He then questioned that how would he(the producer) clean up his mess after they have settled this issue amicably?

Read this: Sarkodie shows up as a surprise guest at M.anifest’s concert