Stonebwoy finally opens up on the Kelvyn Boy-Ashiaman attack

He also responded to the allegations that he was behind the attack on Kelvyn Boy. 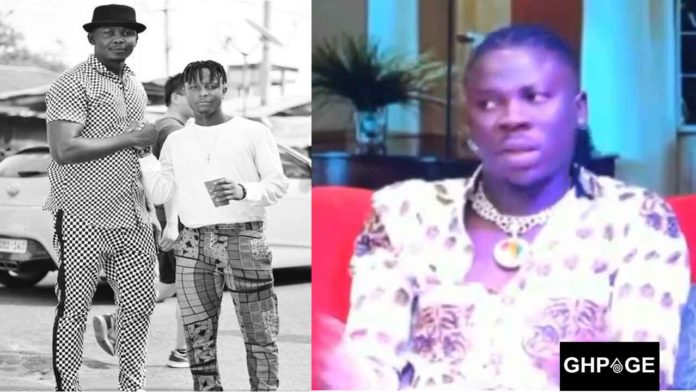 The CEO of Burniton Music Group, Livingstone Etse Satekla popularly known as Stonebwoy has finally opened up on the Kelvyn Boy-Ashiaman incident.

In an interview with Nana Ama McBrown, the ‘Sobolo’ hitmaker explained that he had nothing to do with the attack and played no role in it.

He added that he had to take legal action because he was accused of being involved in Kelvyn Boy’s attack at Ashiaman.

According to Stonebwoy, the accusations against him tarnished his hard-earned reputation and had to disassociate himself from it.

He also disclosed that this is not the first time Kelvyn Boy has disrespected his brand and its high time he takes legal action against him.

“I was home when I saw the tweets which insinuated that I sent someone to attack Kelvyn Boy. My legal team had to respond and put a statement out there through the company to protect the Stonebwoy brand.

And to also disassociate from the said insinuations that Stonebwoy has sent people to attack him which we don’t condone. This is not the first time he has made such insinuative posts to tarnish my image”, Stonebwoy explained.

Stonebwoy who sounded very emotional also added that such disrespects in the entertainment industry should not be encouraged because he will never disrespect Samini.

This comes after Stonebwoy was accused was being the brain behind Kelvyn Boy’s attack on 22nd June 2020 at Ashiaman.

Former Sarkcess Music signee, Strongman Burner has opened up about how he is labelled as ungrateful after deciding to remain silent about...
Read more
Entertainment

Ghanaian musician, Wanlov the Kubolor has revealed how his sister, Derby caught Fella Makafui having a sexual affair with Medikal.
Read more
Entertainment

Wanlov the Kubolor has in an interview on the Afro Joint Show on Kingdom 101.9 Fm disclosed that he named his first...
Read more
Entertainment

Musician and one half of music duo FOKN Bois Wanlov da Kuborlor has revealed that he has a special remedy that helps...
Read more
Entertainment

Akuapem Poloo to lose custody of her son?

Akuapem Poloo to be banished from her home town

The traditional ruler of Mampong Akwapim Apesemankahene; Nana Yirenkyi I has reacted to the viral unclad photo of Akuapem Poloo and her...
Read more

Funny Face has been through hell for the past two months and it appears to have ended. The popular comedian has found...
Read more
Lifestyle

A young man alleged to have been a member of a group who packed bundles of cash alleged to be belonging to...
Read more