Stonebwoy gets heroic welcome in the Gambia,performs to thousands of fans at Ecofest 2019 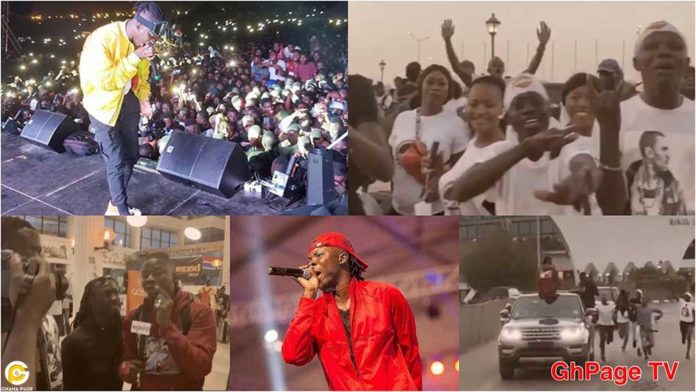 Ghanaian sensational dancehall artist Stonebwoy was invited to perform in The Gambian’s Ecofest 2019 and he got a heroic welcome when he arrived at the airport.

In a video, he shared on his Instagram page sighted by GHPAGE.com had many BHIM nation fans trooped to the airport to welcome the star.

The BHIM fans in The Gambia were seen chanting the ‘BHIM nation’ slogan and were even running after his car which Stonebwoy had to use the roof to welcome the hurrahs.

In the evening, yesterday 5th April 2019, Stonebwoy had the opportunity to perform to the thousands of fans gathered at the Independence Stadium in Bakau.

He opened his performance with hit tracks like ‘Hero’, followed ‘Most original’ which he featured Sean Paul and other hit songs to thrill the charged audience.

In 2018, Patoranking and Patapaa headlined the event.

Stonebwoy is one of the big giants in the Ghanaian music industry. The CEO of Burniton Music Group.

In 2015, he won his highest award which is the Best International Act: Africa at the 2015 BET Awards.

READ ALSO: Top actors who played couples on TV and got married in real life

He has had more features and collaborations with big international acts like Sean Paul, Morgan Heritage, Casper Nyovest Beenie Man and others.