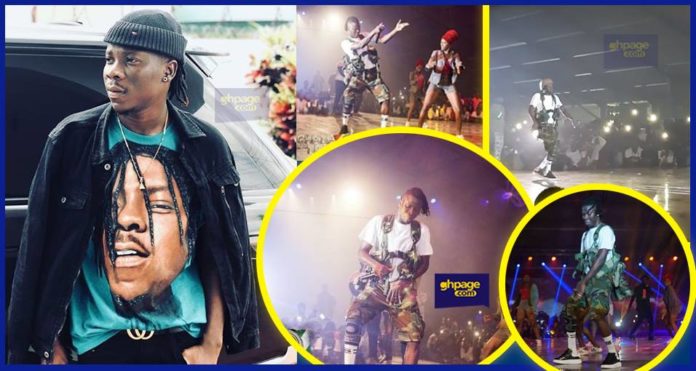 Bhim Nation boss, Stonebwoy has rubbished Nhyiraba Kojo’s assertion that musicians in Ghana should give Shatta Wale a cut of what they charge per show due to the high bars Shatta Wale has raised in the Ghanaian music industry.

Nhyiraba Kojo in an interview over the week with Zylofon FM said: “now artists are been able to charge to charge 50K and above, so artists should give Shatta Wale a cut of it.”

According to Stonebwoy, Nhyiraba Kojo’s statement isn’t complete as on which kind of bar as he Stonebwoy he won’t give anything to him.

Speaking to King Lagazee on Hitz FM, Stonebwoy asked King Lagazee which bars did Shatta raise after he was asked his opinion on the bars Shatta Wale raised for the Ghanaian music industry.

The Bhim Nation president also added that Nhyiraba Kojo has the right to say whatever he wants but if he charges above 50000 cedis he can pay a percentage to Shatta Wale, they are behind him.

He also revealed, he started charging 50K before Shatta Wale came into the scene over this 50K and above chargers as he knows other artists who even charge more.

Read More: If not for the intervention of Bola Ray, we would have beaten Shatta Wale in London – Stonebwoy reveals