‘Stonebwoy is getting mad, let’s ignore him for the meantime’- Shatta Wale tells his fans 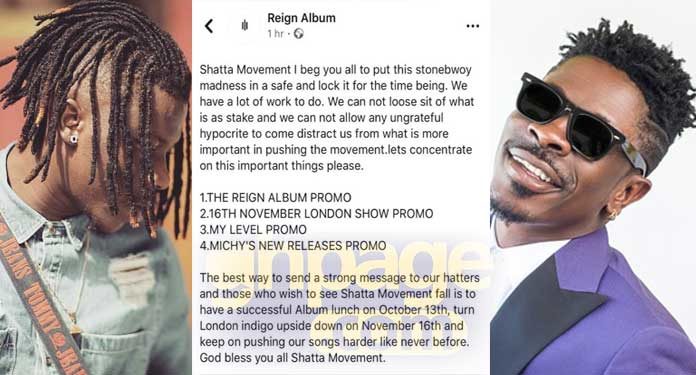 Shatta Wale has launched fresh attacks on his rival, Stonebwoy, surprisingly telling his legions of fans not to pay any attention to Stonebwoy following the emotional-laden interview he had on Hitz FM a few days ago.

According to the Afropop, Reggae -Dancehall artiste, Livingstone Etse Satekla who is better known as Stonebwoy, they nearly meted out a bad treatment to self-acclaimed dancehall king Shatta Wale in London during Ghana Meets Naija UK.

According to a very close friend of Shatta Wale, Shadrach Amanoo Crabbe, Shatta during Ghana Meets Naija show in the UK was crying at backstage and when asked by Bola Ray, he stated that Shatta Wale is mocking and insulting her dead mother.

Stonebwoy in the interview with Hitz Fm yesterday stated that his doors are always opened for collaboration with the “Ayoo” hitmaker but he(Shatta Wale) must make sure the song makes sense because he doesn’t waste his time and energy on anything like that.

And just we thought Shatta Wale would reply in his trademark fashion, he actually poured cold water on the subject; temporarily though.

In a post the Gringo hitmaker shared on his social media platform, the controversial artiste asked his fans to remain and not utter any word until he successfully launch his upcoming Reign album. 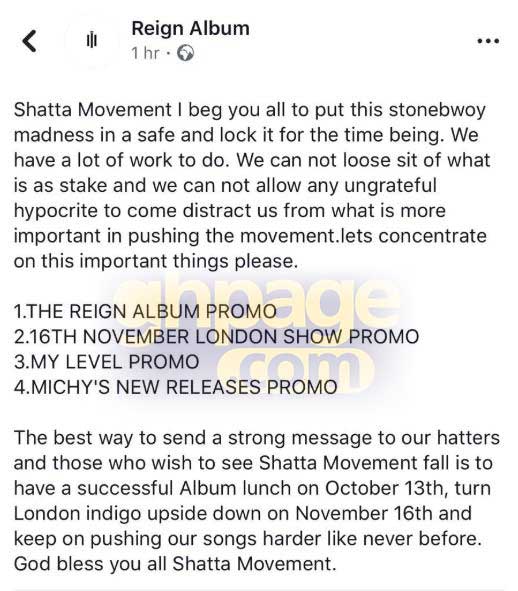