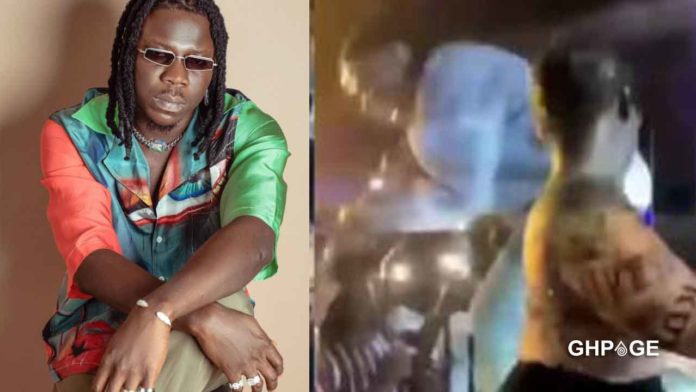 BHIM Nation President, Stonebwoy has earned the praise of the public after a video of him preventing a fan from recording a female dancer in a short skirt circulated online.

The dancer who was in the dancing mood took no precaution as she grounded her waist to the rhythm of the Stonebwoy’s music, shaking her huge backside to the crowd.

Apparently, a fan decided to turn his phone camera in a way meant to capture the lady’s underwear perhaps in the expectation to see her vajayjay while she twerked on stage.

Stonebwoy who while performing noticed the movements of the fan to capture what is ‘under’ quickly snatched the phone from the fan and threw it into the gathering enjoying the performance.

The Dancehall Act, however, kept his composure and smartly came back to his initial position to perform to the crowd. The incident happened at the Amapiano and Brunch in Accra on Sunday.

This action by Stonebwoy real name Livingstone Etse Satekla has garnered massive reactions on social media with some applauding the award-winning musician for protecting the lady from shame, others have slammed him.

Check out some reactions on social media;

ghkwaku: “@stonebwoyb did well here. Some people if you give them “free” they want to add the “dom” by force (Ghanaian expression)”

Dollerman Bill: “Him go buy the phone plus compensation cos the underpants was given freely for all to see as they wish”