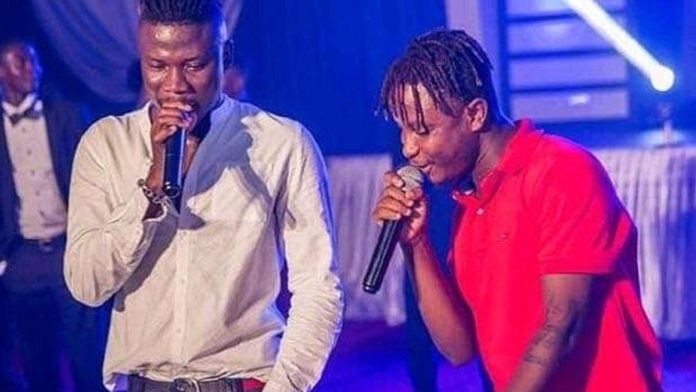 Stonebwoy, the CEO of Burniton Music Group has rejected the apology from his protege, Kelvyn Boy few hours after the video of him apologizing hit online.

According to Stonebwoy, the apology is fake and it was dashed out by Kelvyn Boy just to save his face following his recent interview to expose how ungrateful he has been to him.

SEE HERE: Kelvyn Boy goes down on his knees to apologize to Stonebwoy for being ungrateful to him whiles performing in Italy [Video]

Stonebwoy explained that if indeed Kelvyn Boy plans on apologizing to him for the ungrateful actions and the betrayal, he would have done it the right way.

The Bhim Nation boss told Citi FM’s Jessica that none of the people Kelvyn Boy sent to apology knows him (Stonebwoy) more than him (Kelvyn Boy) so he would have been the right person to apologize to him since he knows where he stays.

SEE ALSO: Ghanaian USA Army officer Commits suicide after catching his wife in bed with another man just two years after bringing her to the USA [Photos]

Reacting to the apology on Citi FM, Stonebwoy said:

“Kelvyn Boy’s Apology is Just To Save His Face in Public if you ask me; The people he asked to beg me don’t know me more than him. If he wants to apologize to me, he knows where to find me.”

A video surfaced yesterday of Kelvyn Boy kneeling to apology to Stonebwoy for all the things he has done to him.

He also asked the people at the show he was performing to also join him to apologize to his boss and forgive him.

Well, we now know where Stonebwoy stands. Ghpage.com will keep you updated on the ongoing brouhaha at the Bhim Nation Camp. Stay with us