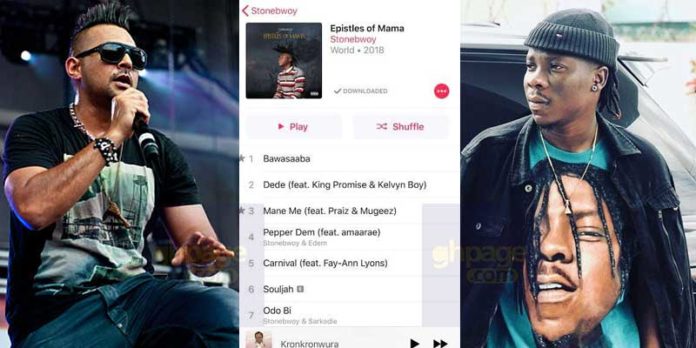 Bhim Nation boss, Stonebwoy and his management has made a change to Stonebwoy’s 2017 “Epistles of Mama” album on Apple’s music store, iTunes.

Read also: Audio: Epistles Of Mama; Zylofon did not contribute a penny to that album -Stonebwoy Shockingly Reveals

Read this: My Parents Had Doubt In My Music Career- MzVee Opens Up

The album, which features a tall list of artistes including Kabaka Pyramid, Sarkodie, Mugeez, Efya, AKA, Praiz and Burna Boy, debuted on the Billboard World Albums Chart in March 2018 and peaked at 13.

Stonebwoy’s ‘Epistles of Mama‘ after its release was rated the second best album in the world. His spot gunned down many heavyweight albums, which saw Chronixx’s ‘Chronology‘ topping the list.

The album which was released last December featured artists including Sean Paul, Burna Boy, Sarkodie, Efya, King Promise, Edem and Joey B. The double disk project was made up of 24 songs – 12 Dancehall/Reggae songs and 12 Afrobeat songs but the removal of “Most Original” which featured Sean Paul in the latest update on the popular music store leaves 23 tracks on the album.

So why the sudden change in the release date and removal of Sean Paul?

Read also: Stonebwoy’s New Album ‘Epistles Of Mama’ Rated By Reggaeville As Number 2 In The World

Well, according to our entertainment analyst, Stonebwoy might be targeting awards in 2019 with his album because it has a lot of hits which are dominating charts this year but can an album which was listed alongside Ebony Reigns “Bonified”, MzVee’s “Daavi” and Sarkodie’s “Highest” for the 2018 edition of the Vodafone Ghana Music Awards be nominated again?

Or maybe he’s targetting the Grammy’s or there might be a mistake by his management.

Read also: “Stonebwoy Knows He Didn’t Deserve the 2015 BET Award, I Did” – Shatta Wale Cries Out