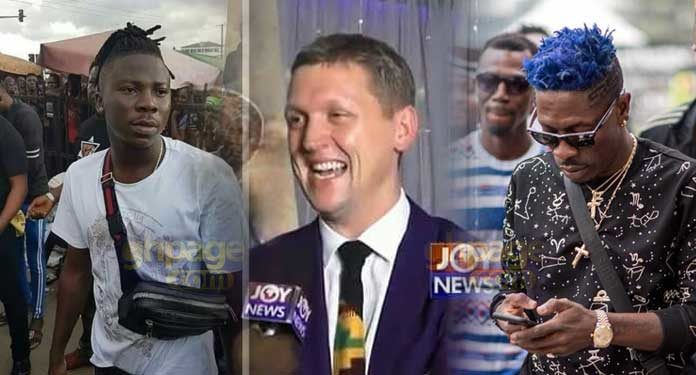 British High Commissioner to Ghana, Ian Walker, says he has been following closely the banter between Shatta Wale and Stonebwoy and describes it as fun.

According to Ian in a video, monitored by Ghpage.com, it is entertaining to watch the two dancehall artistes argue as arch-rivals.

“I like the fact that Shatta Wale and Stonebwoy keep having their little arguments. That makes me laugh…It is entertaining,” he said.

Although the two are on the same record label, for close to two weeks now, Shatta Wale and his rival, Stonebwoy have been at each other’s throat. They have called each other names and have even threatened to harm each other if they meet with Shatta Wale declaring that their rivalry is not ending anytime soon.

Not long ago, Stonebwoy in an interview on Hitz Fm insulted Shatta Wale of accusing him of killing his own mother and later comes back to suggest making peace with him; a situation which he finds it insulting.

The ‘Baafira’ hitmaker used abusive words against Shatta Wale during the interview over the allegation.

Iain Walker believes the two artists have performed remarkably well for themselves and Ghana.

“Those guys are both brilliant, talented and really successful. I wish them all the best,” he added.

Iain Walker replaced Jon Benjamin, a man whose tenure in Ghana as a diplomat was deemed controversial due to some of his utterances and actions.

The new commissioner has been under the radar for some time, nothing is much heard of him unlike his predecessor, Jon Benjamin who was always in the news for making comments being it entertainment, politics and social issues.

We think the Jon Benjamin’s blood has started running through Ian as he has started wading into Shatta-Stonebwoy beef.