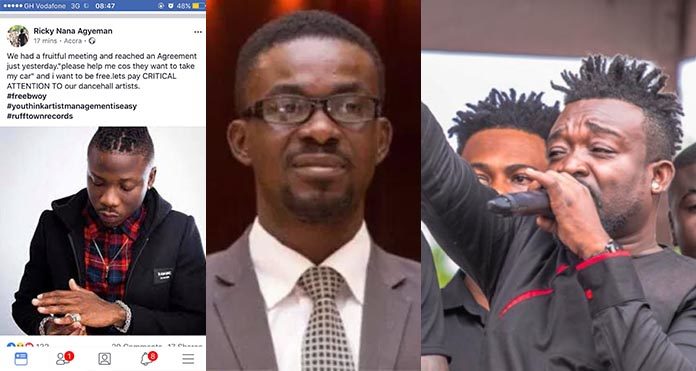 Well, it seems Bullet has finally got his revenge on Nana Appiah Mensah as in recent days, there have been controversies surrounding their media outfit and one of their Dancehall Act who happens to be Stonebwoy exiting the record as a result of some unfortunate development that the artist doesn’t feel comfortable with.

According to several reports and close sources, CEO of Burniton Music Group, Livingstone Satekla popularly known by his stage name as Stonebwoy who was signed unto Zylofon Media in 2017 has finally left the record label.

This has made Bullet come out to mock the CEO of Zylofon Media who after the death of his dancehall artist made a controversial tweet revealing that the late dancehall diva wanted him[Nana Appiah Mensah] to bail her out of his[Bullet] record label.

In a post on Facebook, he posted in the same words Nana Appiah Mensah tweeted concerning Ebony’s bailout:

READ THIS TOO: Stonebwoy fires gunshot at Zylofon Media staff led by Bulldog for forcefully trying to retrieve the Mercedes Benz given to him during his signing

“We had a fruitful meeting and reached an Agreement just yesterday.”please help me cos they want to take my car” and I want to be free.lets pay CRITICAL ATTENTION TO our dancehall artists”.
#freebwoy
#youthinkartistmanagementiseasy
#rufftownrecords