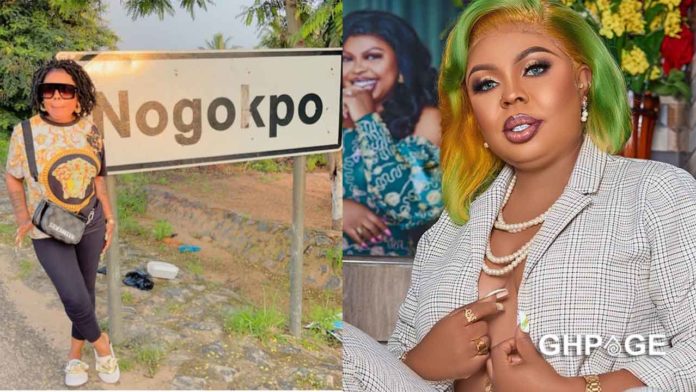 The priest of Nogokpo shrine, Torgbui Amuzu Agbodzalu William has cautioned Afia Schwarzenegger to stop circulating pictures and videos of her visit to the shrine.

The Chief priest confirmed Afia Schwarzenegger‘s visit to the shrine but explained that visitors are not allowed to post their visits on social media.

Torgbui Amuzu warned the media personality to desist from posting pictures from her visit to the shrine to enable the gods to judge the matter justly.

According to a statement released by the Chief priest, Afia Schwar was allowed to communicate with the gods alone and the issue will be settled soon.

“Nogokpo Shrine as popular and very serious Shrine is being visited by many people worldwide but as the customs demand, it is not allowed to circulate any pictures of your visitation on social media or in any public domain to create fear and panic before gods judge the matter brought. I am thereby warning Afia Schwarzeneger to stop that practice immediately”. excerpt of the statement read.

Afia Schwar visited the Nogokpo shrine after Lawyer Maurice Ampaw accused her of sleeping with dogs and lied about having a sexual relationship with Chairman Wontumi.

She also visited about three shrines to help prove her innocence and also punish those who falsely accused her.