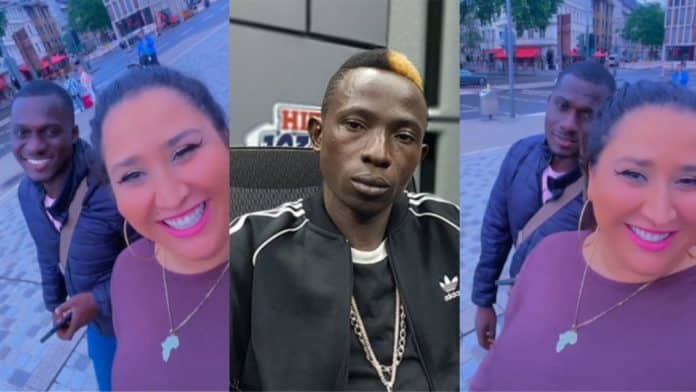 The beef between Zionfeix and Patapaa is not ending anytime soon because the feud extends to different dimensions each and every new day.

After Patapaa accused Zionfelix of trying to snatch her German wife from him through a series of posts and interviews, the blogger dropped a rebuttal to disassociate himself from such a heinous act.

We all thought Patapaa would have ceased fire after Zionfelix’s open message to him that he has nothing to do with his wife but we guessed wrong.

Speaking in an interview with Sammy Kay, Patapaa bragged that he has a shred of evidence that opens up to Zionfelix’s desire to snatch his wife from him.

He also added that Zionfelix didn’t attend his wedding ceremony but hurriedly travelled to Germany to interview his wife after news landed on the internet that their affair is in crisis.

In the bid to come clean once again, Zionfelix has cautioned Patapaa to be careful with his unnecessary rants because it signals that his wife is a cheap woman.

According to Zionfelix, he’s very disappointed in Patapaa for tarnishing the image of his own wife in such a barbaric manner.

Zionfelix also added that Patapaa’s attacks on him imply that his wife has been sleeping around which is not very good because there’s no truth in his sentiments.

READ ALSO: “I have nothing to do with your wife” – Zionfelix tells Patapaa

Below are some of the comments gathered under the Zion’s video;

@Steven Brown – You don’t have a point. This one dierr Patapaa is making so much sense than you are. If you know marriage is about family, ARE YOU FAMILY??

@Nhyiraba Yaw – Zion, admit that u didn’t do well, and send Patapaa an apology message, the more u try to justify urself, the more u worsen the issue. If someone does that to ur wedded wife while the marriage is facing crisis, will u be happy?? The harm has already been done, don’t try to justify urself. Jxt “am sorry” can solve the whole issue with Patapaa. Besides u urself knows that ur dick no dey sleep, so Patapaa is afraid u chop the wife low-key.

READ ALSO: I don’t want to see my wife again because of Zionfelix – Patapaa

@Samuel Amaning – It’s not like patapaa doesn’t like you,he’s angry with you because of something he might have seen going on between you & his wife..no sensible person would just allege without an iota of truth in whatever he/she’s alleging.Zion even if you’ve nothing to do with the white lady,your closeness to her is too much..obi yere for God sake!!!

@Franklin Awenbila – The best thing is to be quiet else you will end up worsening things for yourself and the parties involved. Patapaa got everything right from the beginning, you made a mistake accept it and move on