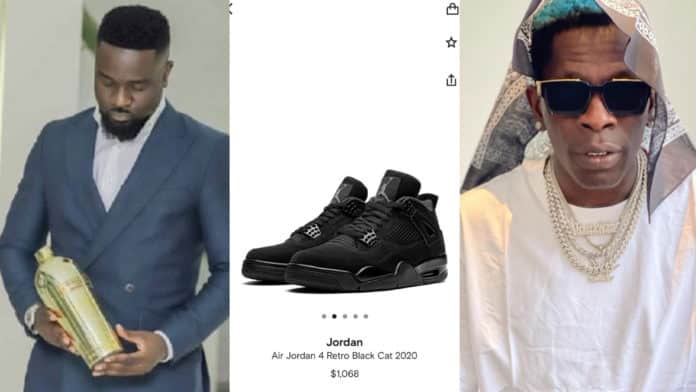 Shatta Wale has joined some netizens to drag Sarkodie over a post he made on Twitter about the original sneakers he wears.

The Sarkcess CEO has come under fire for retweeting a hustler’s post with a sneaker selling for $1068 with the statement that he wears originals.

The post has incurred the wrath of many netizens who believe Sarkodie was immature in his submission, especially when he was trying to prove a point about his choices and taste.

On the back of that, Shatta Wale has subtly jabbed Sarkodie by describing him as a musician who has transitioned successfully into being a fashionista.

According to him, Sarkodie is more concerned about what he wears than his music, while he should probably be more focused on his music.

I just hear your king sark news from konko Sheldon my best friend and I think at this point we need an apology from kabutey to every fan.

Ah broda sark paa u deh watch ghana economy deh talk like this ..Maybe Yes ,God has been good to us but not everyone is like us. U get me lolI beg relax give street boys cuz u no deh street ,Ade street 247 ,,,Ground hot ruff

I beg sark is our own if you roast am small is ok .

Me sef I wear banku saaaaIbe now weh I start see diamonds  I beg you sir ..sorri (in Taju voice )

You can wear fake certain times in life which is  allowed because of situation but don’t live a fake life broo ..niggas can roast u up …

Meanwhile, many have chastised Sarkodie and some of these posts have been screenshotted below: