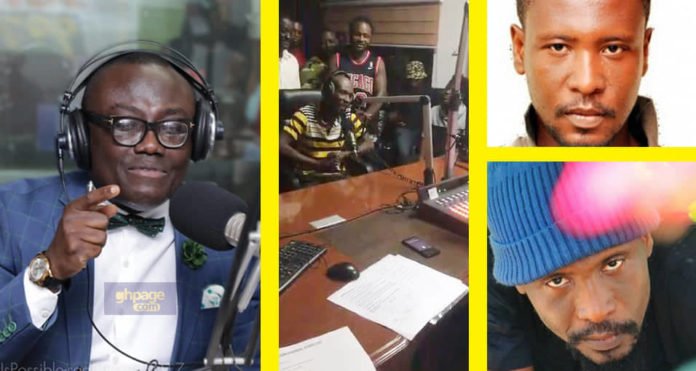 “Wotaataa Me” hitmaker, Okomfour Kwadee has revealed that he will find it very difficult to give up the smoking of marijuana after he was challenged by the Chief Executive Officer (CEO) of the EIB Network, Kwabena Anokye Adisi alias Bola Ray to quit for a week so he can surprise him.

Bola Ray in an interview with Kwadee ahead of the much anticipated S concert asked if whether he promotes the smoking of wee to which he responded in the negative saying he doesn’t promote wee and has never even passed “wee” to another person before.

The media mogul then asked that he should try to stop smoking so that the upcoming youth and others who look up to him would not engage in the use of wee.

Bola then threw the challenge to him to stop smoking weed for one week and he would show him something.

“Kwadee can you put a stop to it? Can you say as an icon you can go without weed for one week? Can I throw that challenge to you that From S-Concert…from Friday to the next Friday you will stay off weed and I will show you something”

But in a subtle response, he said he would be found on another tree (literally Meaning he would start smoking a different thing) even if he stops smoking weed.

It would be recalled that Madam Cecilia Sakia, the mother of the rapper in an interview with Ghpage TV, reacted to reports that she is behind the problems that have befallen her son. According to the woman, Kwaade’s problems are self-inflicted and it has been confirmed in every place she has taken the son to for help.

According to her, most places including health facilities she took him to, revealed smoking was the cause of his problems he battled for nearly 12 years and was advised to put a stop to it. Watch the interview here.