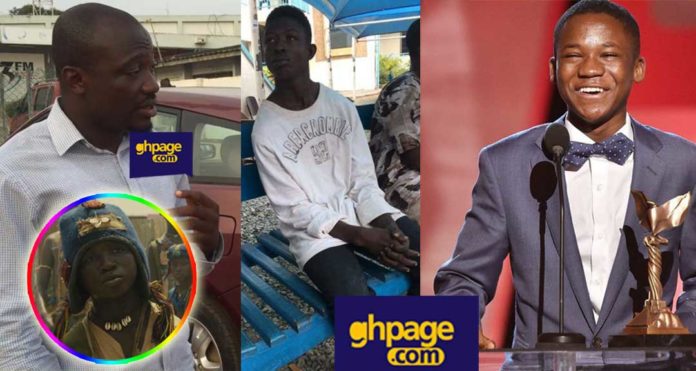 Mawuko Kuadzi, the manager of both Abraham Atta and Emmanuel Nii Adom Quaye aka Striker has come out to deny the allegations level against him by the young street gangster, Striker.

According to Mawuko, the street is not where Striker lives but he has run from boarding School and he has actually been looking for him until he saw his photos all over the media that he is begging for money on the street.

Mawuko explained that contrary to the statement from Striker that he has not been given his money from acting Beast of No Nation, the money is in a trust which is earning interest for him.

Both the payment he received after the movie was shot and the $30,000 he was given after Netflix bought the movie are in the Trust.

Although he is 18 years and can legally access his money, they are holding to it because of his street life and the fear that he will mismanage it if all is given to him, Mawuko said.

SEE HERE: “I WAS PAID $30K AS MY SHARE OF ‘BEAST OF NO NATIONS’ BUT AM YET TO SEE THE MONEY” – HOLLYWOOD ACTOR, STRIKER WHO NOW BEGS ON THE STREETS FOR A LIVING

All three were pout into a luxurious school in Cape Coast called Montessori school but Abraham Atta found favor with one of the producers who moved him from the school to the USA to school there. But Justice, the other boy is still in school but Striker keeps running away from school. This is the 10th time he has run from school.

SEE ALSO: ABRAHAM ATTA HAS CHANGED TOWARDS ME: HE IS RUDE AND TREATS ME LIKE HE IS BETTER THAN ME – STRIKER [VIDEO+PHOTOS]

A lot has been said since yesterday when news broke that Emmanuel Nii Adom Quaye, the young Ghanaian actor who played the role Striker in the Hollywood movie, Beast of No Nations was begging for money on the streets of Accra to buy food.

The report went on to add that Striker works with a man who sells yam at the Agbogbloshie Market and he stays with his grandma at North Kaneshie.

Mawuko has since gone for Striker after the news broke. He is staying with him and he is thinking of the next action to take concerning him (Striker)

WATCH THE INTERVIEW WITH MAWUKO BELOW