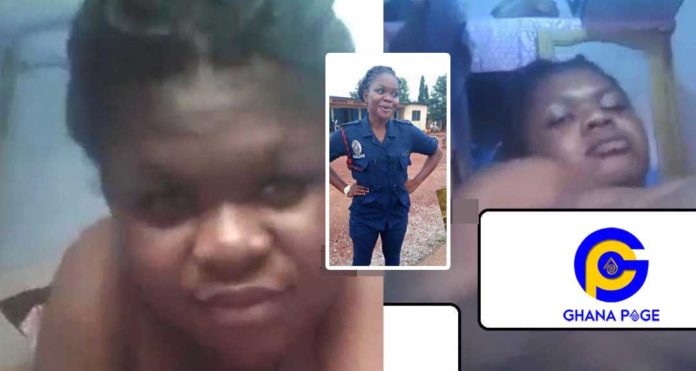 One of the most trending news in Ghana presently is the leaked atopa tape of a female police officer based in Sunyani.

The question that has been on everyone’s lips since the video hit social media is how it all happened. Ghpage.com now has the answer after making extensive inquiries.

The young lady who is a mother of one has dumped her baby daddy who is also a police officer and has been dating an Italy based Ghanaian called James for a while now.

According to Ghpage.com source, it was James who requested for the video since he is out of the country but unfortunately for the lady, the video was sent to a friend of James instead. Before she could delete it, it had already been downloaded.

James friend assured the police constable he has deleted the video and no else will see it. But he ended up spreading it among friends. Gradually, it hit social media

The police officer believed to be a police constable was in the video alone and the kind of things she was doing in the about 6 minutes video is absolutely sickening.

She started by fondling her boobs, then rushed to locked her door and what followed was disgusting, she was seen in the video [email protected]*ting like there is no tomorrow.

There have been mad reactions to the video since it went viral with many questions why a person of the law who is supposed to know better would stoop so low to do such a sickening video.