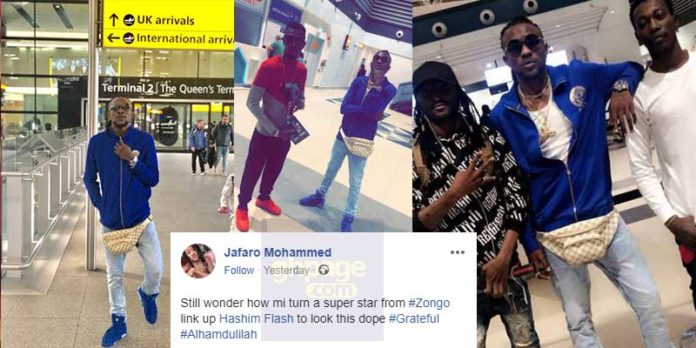 One of SM militants, Addi Self has stated that he’s now a superstar after going to London for the first time.

Shatta Wale is currently in London as he’s expected to perform at the O2 Arena tomorrow, 16th November 2018 as part of his Reign album tour concert.

The dancehall artiste took his militants, Addi Self, Joint 77 and Captan and this is the first time they’ve all travelled to the UK and for Addi Self, this great achievement has now made him a superstar.

Taking to his Facebook wall, the “Today Too” crooner said he’s still in wonder at how a Zongo boy like him has turned into a Superstar.

“Still wonder how mi turns a superstar from #Zongo link up Hashim Flash to look this dope #Grateful #Alhamdulilah”, Addi Self wrote.

Meanwhile, Addi Self has stated emphatically that he is talented that Stonebwoy’s protegee Kelvynbwoy and also lyrically better than the Bhim President himself Stonebwoy. Read the full story here.