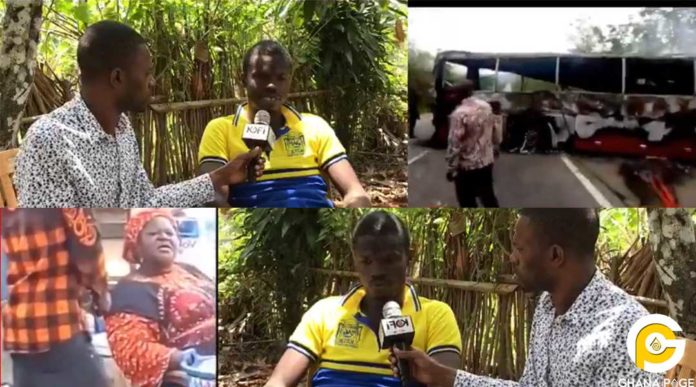 At least 70 people were killed in the head-on collision between two buses on the Kintampo-Techiman road on Friday, 22nd March 2019.

The surviving mate who was in one of the buses, the VVIP, has narrated how the accident happened on that black Friday.

He said the car he normally works with as a mate has been sold so that very day, he went to the station to check if he could get a car to work with.

Lo and behold, that particular driver didn’t have a mate so he requested he joined him to work that day.

According to the mate, Akorsah Kwabena Christian, they loaded from Accra Circle at 4 pm en route to Tamale. They passed through Kumasi to pick some of the passengers and continued the journey to the Northern part of Ghana.

And when they got to Techiman, he moved from where he was originally sitting to a very closer area(around the Gearbox) to where his master, the driver was.

Then suddenly, he saw the approaching bus which was coming from the North to Kumasi speeding towards their lane. The mate added, even though, that bus was not doing any overtaking nor had a car in front of it, it was still steering to their lane.

By then, the edges of the road was hilly and rocky, so his driver couldn’t veer into any bush or give the approaching bus much space— yet he tried his best to move away from the road so he would dodge the over-speeding approaching bus.

His best obviously wasn’t enough as the bus kept coming towards them and it collided.

Akorsah said he didn’t hear any noise or even a cry but later found himself outside the bus and that was when he heard people crying for help— and also saw the bus in flames.

He went to search for his master, the driver, and he was already gone—with his head and left hand cut off.

According to the mate, he was informed after the accident that the driver who collided with them was sleeping at the time.

According to the police, the fatal accident happened around 2: 00 am on Friday at a town called Ampoma in the Bono East Region.

Preliminary investigations reveal the two buses, one with registration number GT 5694 18 and the other GT 3916 17.

Both had a total of 108 passengers on board.

The police report 53 of them survived but with various degrees of injuries. Adding that the survivors are receiving treatment at various health facilities.

They gave the following breakdown of the injured and where they had been sent to; 40 were sent to the Jema Hospital; 12 persons are also receiving medical attention at the Holy Family Hospital in Techiman while one other person is receiving treatment at the Government Hospital in Wenchi.