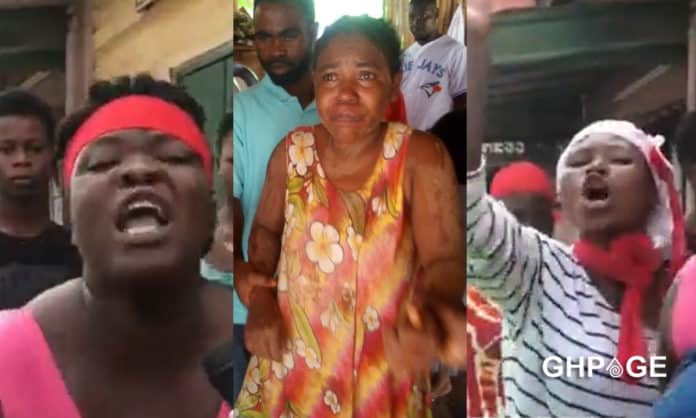 Some residents of Columbia, a suburb of Takoradi, have hit the streets in an angry protest to demand justice for Josephine Panyin Mensah, the said 9-month-old pregnant woman who was allegedly kidnapped in Takoradi about two weeks ago.

In a statement on Thursday, the Police said a thorough medical examination by the medical doctors at Axim Government Hospital revealed that the woman who was found on Tuesday was never pregnant, as her family had claimed.

It further said Medical records at the European Hospital, also in Takoradi, where Josephine claimed to have gone for antenatal care also showed that she visited the facility without pregnancy in October last year.

However, residents in the community have also corroborated the account of the family that the supposed victim was indeed pregnant.

Scores of men and women, some wielding placards with red arm and head bands showcasing their fury, have since taken to the streets to challenge the police findings.

Police investigations have suggested that the woman may have conspired with other persons over her disappearance.

According to the Police statement, three persons have so far been arrested for further questioning over conspiracy charges.

It said the supposed victim, who is also now a suspect, during her interrogation mentioned the European Hospital in Takoradi as the hospital for her antenatal reviews and assessment.