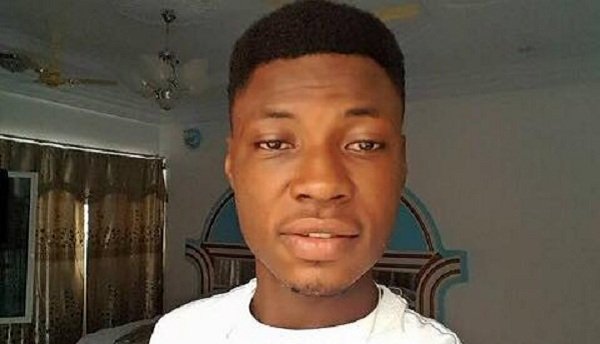 One of the most popular cyber fraudster (Known in local parlance as Sakawa) in Tamale, the Northern Region Captial of Ghana, Maxwell Peter has finally been arrested in connection with a $10 Million Gold scam.

Sakawa King as Maxwell Peter is affectionately called lives an extravagant life in the Tamale Metropolis. He has a fleet of luxurious cars and lives in a million dollar mansion.

The Tamale Sakawa King was arrested through a joint operation at his home by a combined team of security personnel from the Economic and Organised Crime Office (EOCO) and Bureau of National Investigations (BNI) last weekend. He has been since been taken to the National Capital, Accra.

SEE ALSO: Sakawa boy dies after going against a rule not to touch water

He was arrested following over a year of a joint investigation by Economic and Organised Crime Office (EOCO) and Federal Bureau of Investigations (FBI) of the United States of America.

According to the authorities that busted Maxwell Peter, he [Maxwell Peter] and his team created a bogus email usually containing either an attachment or a link to a malicious website which was linked to the said real estate company and infected the company’s entire computer network and harvested information including company files, credentials and gave the accused persons access to sensitive information which aided them to dupe the company.

SEE ALSO: I Have$2 Million But My Life Is In A Living Hell- Sakawa Boy Confesses

Out of the 11 Team members of the Sakawa King, 6 people have been arrested. They are Maxwell Peter, Babatunde Martins, Bernard Emurhowhoariogho Okorhi, Dana Brady, James Dean, Javier Luis and Ramos Alonso. The remain 5 who are on the run are Sumaila Hardy, Victor Daniel Fortune Okorhi, Dennis Noah, Olufoajimi Abegunde, Ayodeji Olumde Ojo.

SEE ALSO: 11 areas in Ghana with the Most Sakawa / Fraud Boys