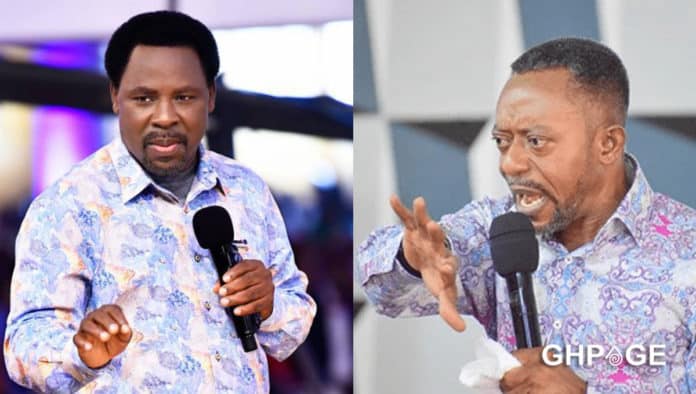 The founder and leader of Glorious Word and Power Ministry, Rev. Owusu Bempah, has said that he Prophesied about the death of a popular Nigerian Prophet.

This comes after the demise of the founder of The Synagogue, Church Of All Nations  (SCOAN), Prophet T.B. Joshua, on Saturday, May 5, 2021.

Rev. Owusu Bempah, in an interview on Peace FM, confirmed that he delivered the prophecy during one of his sermons but admitted he did not mention TB Joshua’s name to that effect.

According to him, the prophecy was an opened one.

“My junior pastors drew my attention to my prophecy about TB Joshua in church some time ago but I did not give that prophesy on the 31st night as I use to do,” he told Peace FM’s Kwesi Aboagye.

Prophet T.B. Joshua passed away one week before his 58th birthday.

According to sources, he suffered a stroke two months ago and was flown by air ambulance to Turkey for treatment.

The prominent Nigerian televangelist recently returned to Nigeria after treatment.

His church confirmed his death in a statement issued on Sunday.

“On Saturday 5th June 2021, Prophet TB Joshua spoke during the Emmanuel TV Partners Meeting: Time for everything – time to come here for prayer and time to return home after the service,” the statement said.

“God has taken His servant Prophet TB Joshua home — as it should be by divine will. His last moments on earth were spent in the service of God. This is what he was born for, lived for, and died for.”