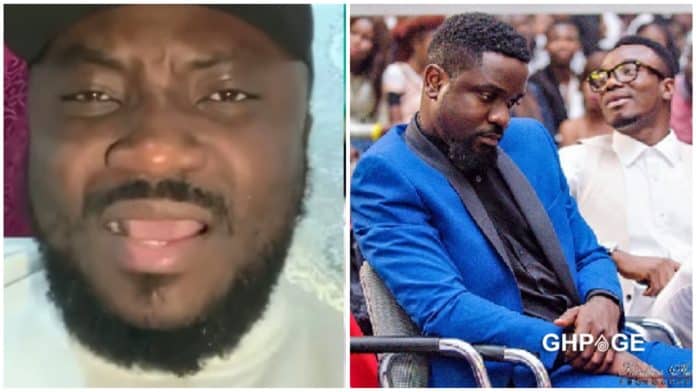 Sarkodie is currently being dragged on the internet over his comments about the current state of affairs following the strike by commercial drivers in the country’s capital.

According to Sarkodie who has been fingered by a couple of Ghanaians as an NPP stalwart, the economic situation in Ghana is getting worse by the day therefore Nana Addo needs to up his game and produce a conducive environment for the youths to be productive.

“The people are going through it !!! We always do !!! All we ask for is the right environment to hustle/ be productive”

This tweet from Sarkodie has landed him into a deep trouble as angry netizens have pounced on him like scavengers to devour the last of his flesh.

The comments under Sark’s message to Nana Addo are full of insults and name-calling as many people have opined that he’s been a hypocrite.

The many Ghanaians who believe Sarkodie is creeping Jesus includes the headmaster of Ghana’s comedy – DKB.

DKB who is plain spoken has also taken to his Twitter page to blast Sarkodie for sitting on the fence and behaving like he cares.

As emphatically stated by DKB, nothing annoys him than a celebrity who has shown his party colors but thinks his fans can’t see therefore pretends to speak for the ordinary Ghanaian citizens for public applause.

“Nothing annoys me like a celebrity who has shown party colors but thinks we can’t see & tryna pretend to be speaking for the people. Me DKB I be fucken real, if I ever endorse a party & things aren’t going well, I’ll fucken say it! The fans are not stupid, they see everything!“

READ ALSO: Drivers strike: Pressure mounts on Sarkodie as many demand he does a song on the economic hardship in the country

Until Sarkodie releases a diss song for Nana Addo just like he did for John Mahama, any political opinion he shares would be taken as an insult by most Ghanaians.