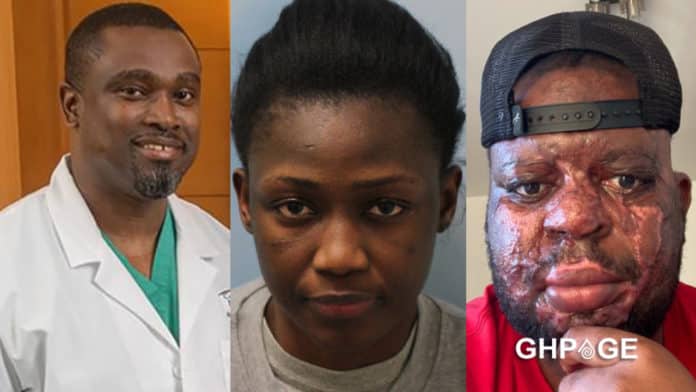 Some Ghanaians living abroad have been in the news for the wrong reasons in the last two years, with reports making the headlines related mostly to crimes.

Although the negative reports do not outweigh the positive, the impact on Ghanaian nationals in the diaspora could be alarming as far as criminal matters keep giving the country bad press.

In this article, we focuses on some of the big stories coming from people of Ghanaian descent but who have, in the last two years, been engaged in some forms of crimes.

The heart surgeon of Ghanaian descent who plies his trade in the United States of America has been sentenced to seven years in prison for several counts of healthcare fraud.

Moses deGraft Johnson, according to a report by Tallahassee Democrat, was a one-time jet-setting heart surgeon who walked away with millions of dollars for medical procedures he never performed.

The report stated that, Chief U.S. District Judge Mark Walker, who imposed the punishment during a hearing Thursday, November 18 at the federal courthouse in Tallahassee ordered the accused to pay $28.4 million in restitution — the same amount he bilked from the government and private insurers.

In February 2020, Moses deGraft Johnson, was indicted on 58 counts of healthcare fraud. He was accused of ripping off Medicare, Blue Cross Blue Shield and others by billing for expensive procedures he never performed on his underprivileged patients.

Moses deGraft-Johnson is reported to have once saved the life of rapper 50 Cent after he was shot in 2000 in New York City.

We earlier reported about a jealous Ghanaian lady living in London, United Kingdom, who doused her sleeping boyfriend with acid because she mistakenly believed he was having an affair with his Universiy class mate.

Esther Afrifa, 28, bought a litre of sulphuric acid online to carry out the attack on her 29-year-old boyfriend, Kelvin Pogo, which she hid by her bedside at the home they shared in Wembley,

UK website, Evening Standard reports that Afrifa poured the content onto his chest at 3.30am as he was sleeping and then went to extraordinary lengths to stop him from getting emergency treatment.

“At first, he did not realise his girlfriend was responsible and asked her to get help before pouring holy water on his wounds. She pretended to call 999, blocked his friends from calling, and cancelled a taxi that was due to take him to hospital,” the report said.

More than four hours after the first attack, Afrifa carried out a devastating second attack on her already-wounded boyfriend as he lay on the sofa, pouring more of the acid on to his face and torso.

Afrifa has been sentenced to 14 years in prison. She will initially be detained in a secure hospital due to a mental health disorder that has developed since the attacks.

She is likely to be deported back to Ghana after her release from prison.

READ MORE: Ghanaian woman jailed for bathing boyfriend with acid because she suspected him of cheating

In 2020, news broke about the devastating killing of 27-year-old Barbara Tommey, by her husband, Sylvester Ofori, 35, in Florida, in the United States of America.

News of Sylvester’s actions left the members of his church, Floodgates of Heaven International Ministries, in shock, after their Ghanaian pastor was charged with fatally shooting his wife outside her job at the Navy Federal Credit Union just two days before their fifth wedding anniversary.

A spokesperson for the Orlando Police Department told the Orlando Sentinel that Sylvester Ofori, 35, who leads the church and has more than 60,000 followers on social media, attacked his wife, Barbara Tommey, 27, just before 9 am near the front door of Navy Federal Credit Union on the 4600 block of Gardens Park Boulevard.

In a court appearance, prosecutors told a judge that Tommey’s killing was caught on surveillance video.