TikTok star Asantewaa accused of having affair with her manager, Cassious – Videos pop up 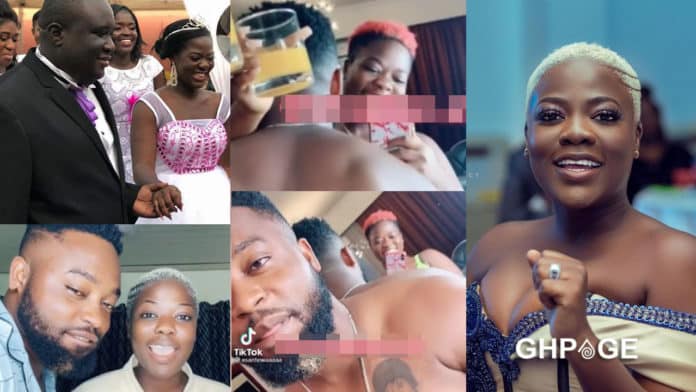 Popular Ghanaian TikTok star Asantewaa has been accused of having an amorous affair with her own manager, Isaac Agyapong, popularly known as Cassious.

Asantewaa, 27, whose real name is Martina Dwamena, is married to a rich man named Jeffrey Obiri Boahe – a Senior Executive at a gold mining company, Anglogold Ashanti Limited. He is said to be the son of NPP leader, Lawyer Obiri Boahen.

She tied the knot at the young age of 23 before her claim to fame on the video-based social networking platform where she has now amassed over 1.1 million followers.

However, Asantewaa’s activities on social media with Cassious has raised suspicions about the true relationship between them, even though they claim to be business partners and nothing more.

Videos of the two in very compromising positions has sparked dating rumours as many suspect Asantewaa of cheating on her husband with her manager who is always seen with her but covers it up with her acting career.

In fact, the chemistry between them is too strong for one not to believe they are romantically involved. It is alleged that the manager even has a tattoo of Asantewaa on his chest – a claim he has refuted saying it’s a tattoo of his late mother.

It would be recalled that Cassious, who is also a movie producer, recently presented Asantewaa with a brand new car as a celebratory gift for gaining over a million followers on TikTok.

A surprised and emotional Asantewaa hugged the manager, went straight, sat in the car for a test drive.

After she came out of the car and as usual of her on social media, she took to the dance floor to give fans some simple celebration dance.

Meanwhile, some TikTok users have vowed to destroy Asantewaa’s beautiful marriage to her wealthy husband who seems not to care about her activities on social media amid claims of cheating on him.

READ MORE: We will destroy your marriage – Fans warn Asantewaa

This was after the graduate nurse took to the platform to advise the youth against teenage pregnancy on her page. While attempting to send a crucial message across, her words were taken out of context as some single mothers came at her with outrage.

One of them even threatened to make sure the marriage between Asantewaa and her husband come to an end.