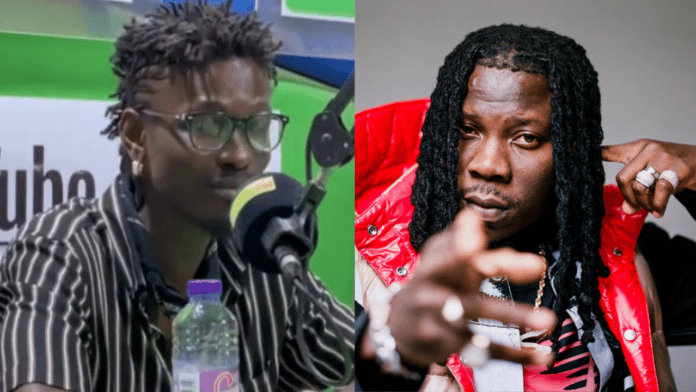 Veteran Ghanaian Hiplife artiste professionally known as Tinny lost his cool during an interview with Abeiku Santana on OKAY FM.

In the middle of Tinny’s interview with Abeiku Santana on Okay FM on Monday, he described Stonebwoy as a fool for offering to pay someone who claimed he (Tinny) owed him.

According to Tinny, the fact that Stonebwoy refused to call him for verification and proceeded to pay the person who claimed that he (Tinny) owes him makes the Afro-Dancehall artiste a big fool.

READ ALSO: Shatta Wale’s heart is too good that he dashed phones to me & all my family – Tinny

“I saw it as just a bunch of fools, a bunch of idiots who had gotten the opportunity to be on the radio. Merqury Quaye is number one, the toppest idiot. The other guy who was also speaking was also a fool. And I wasn’t expecting my colleague Stonebwoy to also be a fool. Stonebwoy also joined the fools to be a fool,”

Tinny’s insults come at the back of the reports that went viral on the internet last May that he charged a show promoter at Worawora in the Oti region GH¢2,000 to headline his show.

READ ALSO: “Things we love to see” – Reactions as Stonebwoy wishes Sarkodie on his birthday

The event promoter, Yaw Menkasa, therefore, told Hitz FM’s Prince Tsegah on ‘U Say Weytin’ that all efforts to get Tinny to refund the money proved futile so he reported the matter to the police.

Stonebwoy who only wanted to be a good samaritan offered to pay off Tinny debt. This harmless and profound action has turned him into an enemy in the sight of his music godfather.