Tiwa Savage finally opens up on her relationship with Wizkid 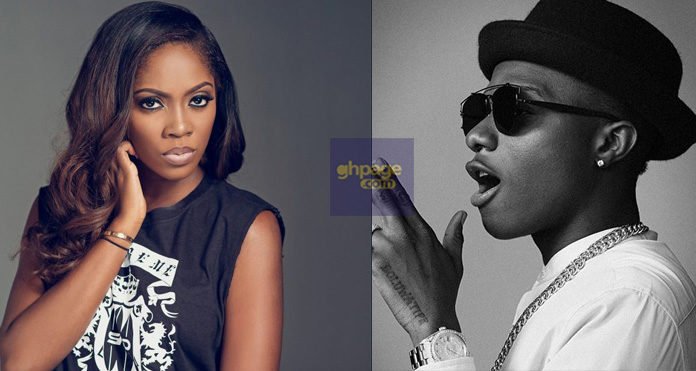 Nigerian singer, Tiwa Savage has finally broken silence on the relationship that existed between herself and Wizkid

The two musicians have been rumoured to be dating but none of them confirmed it but in numerous incidents involving the two shows clearly that they are love birds already.

During his AfroRepublik Concert on Saturday, May 26, 2018, Wizkid and Tiwa Savage shared a sexy PDA moment at the O2 Arena ONLY lovers exhibit. Watch the video here.

The two singers were in Ghana for the “Ghana Meets Naija 2018” concert during which the Star boy reconciled with Ghanaian dancehall singer, Shatta Wale. The two superstars later chilled at a Ghanaian club where they were caught kissing.

Tiwa Savage has dismissed these stories stating that the relationship between the two wasn’t romantic in any way and that the two have never had such an interaction.

Speaking to Soundcity Radio 98.5, she said that she ignored all the rumours surrounding the two and that there was no pressure on her: “I heard all sorts of stories about Wizkid and I, but I chose to ignore them.”

“At a point, people said I was dating Humblesmith; later they mentioned another (artiste?). How long will I continue to debunk these rumours? I have been in the music industry for quite a while and I have grown a thick skin, so certain rumours or insinuations don’t get to me again.”

She also refused to be drawn into commenting on her failed marriage with Teebillz saying that it was too sensitive a topic to talk about on Air; “Marriage is a very sensitive matter that I would not want to delve into at this time. Whatever I say now might be taken by the other party in another way. More so, I respect TeeBlliz and our son. I don’t think it is proper to be discussing this matter on air,”

read also: Check out all the dresses Becca wore at her traditional wedding

Tiwa Savage was also disapproving of the comparisons to Beyonce that she gets a lot and said they are different entities.

She said: “I wish people could stop comparing me to Beyonce. I respect her because she’s about the best female artiste in the world, but I don’t think I want to be like her. I would rather like to be myself. There is no basis for me to be like her or anyone. I don’t know why people think I am obsessed with her. I want to be on my lane and be known as Tiwa Savage, not Beyonce.”

read more: Hollywood Actor now begs on the street of Accra for a living