Topless musicians on Ghana meets Naija Music night,2018: Patapaa, King Promise, Stonebwoy, Wisa battle it out as who's the sexiest 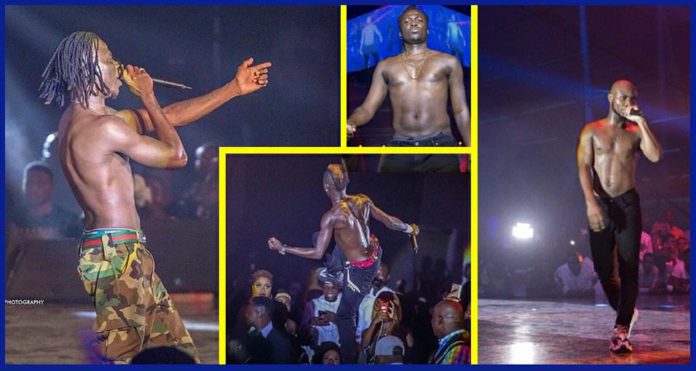 Photos: Patapaa, King Promise, Stonebwoy, Wisa as topless musicians on the night battle it out as to who’s the sexiest

During the performances of some of the musicians – they took it to another level by going topless to perhaps show their female fans what they’ve got.

It started with the usual suspect, Wisa Greid, who took off his shirt. Many feared what he did at the December2Remember would happen but he didn’t touch his pants. Lesson learned!

Next to follow the “No shirt” performance was the leader of the Pa2pa movement, Patapaa Amisty who now wants to be known as Patapeezy. He delivered an energetic performance which got all the audience on their feet. He was topless.

The next performance at the 2018 Ghana Meets Naija who went topless at during his performance was the “CCTV” hitmaker, King Promise. King Promise throughout his show never disappointed. He really thrilled the patrons.

The last person who performed topless during the 2018 Ghana Meets Naija concert was the Bhim Nation Boss. Stonebwoy was one of the best performers that night. He even surprised the crowd by bringing the Black Star Captain, Baby Jet on stage to perform “Dirty Enemies”