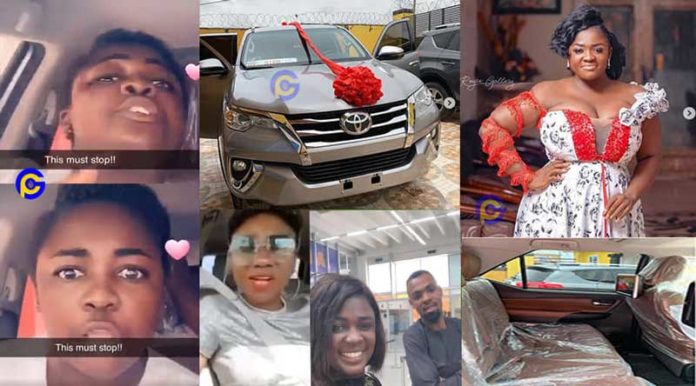 Kumawood actress, Tracey Boakye has sent a strong warning to her critics and social media users for attributing her success to her affiliation with a political party.

According to the actress and producer, she is a very hard working lady and that Ghanaians should refrain from giving credit to politicians for something she strived hard to gain.

“I work so hard for my money and you give credit to innocent politicians. Why? If you deal with me, I will deal with you.

You wouldn’t have it easy with me if I do anything and you give credit to innocent politicians”, Tracey angrily stated.

This outburst by the Kumawood actress comes after she received a Fortuner role model 2019 from her boyfriend as an Easter gift.

Due to her affiliation with the opposition National Democratic Congress, some Ghanaians are of the view that the political party funds all her project.

However, a social media user has replied Tracey Boakye over her recent outburst about the new car she received.

In a video sighted by Ghanapage.com, the lady who is yet to be identified stated that Tracey is the cause behind all this attack on social media.

According to her, since Tracey has declared her support to the National Democratic Congress, anything she acquires will be attributed to the party.

She also advised Tracey to keep her private life off social media if she doesn’t want her achievement to be credited to any political party.

“Tracey you caused all this. Since you endorsed the National Democratic Congress, everything you achieved will be credited to the party.

Be ready for the insults as far as you have made it known to Ghanaians that you are a die-hard supporter of the NDC. Tracey, calm down. If you remained silent after you received the car, no one will attack you for that.

You haven’t seen anything yet until you take your private life off social media you will always be criticized”, the lady stated.