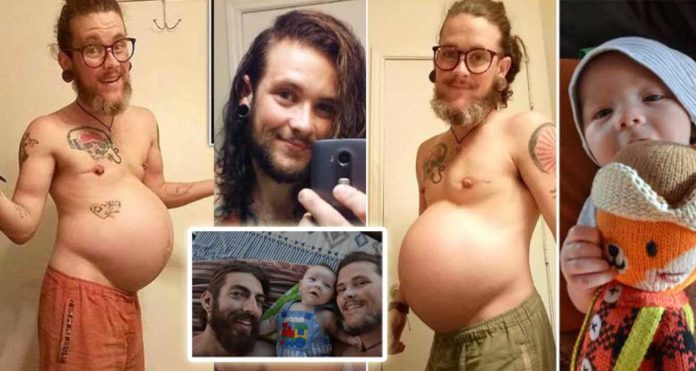 An American Transgender from Texas, 28-year-old Wyley Simpson gave birth to his son, Rowan on 5th September 2018 and on his son’s 6 months birthday, Wiley has detailed his journey through pregnancy.

According to Wyley Simpson, he started transformation to become a man at the age of 21 and he was not ready to have a baby with his fiancé, Stephan Gaeth who is also 28 years old.

But he was left shocked and nervous when he found out in February 2018 that he was pregnant. Despite the doubts, he decided to go on and have the baby.

“I had to deal with a lot of stigma behind me being a pregnant man,” Wyley Simpson said.

But on 5th September 2018 exactly 9 months after the pregnancy, he gave birth via a C-section because the baby’s umbilical cord was wrapped several times. Their son, Rowan weighed 7lb 5oz when he was born.

“It’s not every day that someone sees a pregnant man walking down the road. So we received a fair amount of abuse – I would be told that I’ll never be a man, ‘men don’t carry babies’ and everyone called me ‘it’.

“I was already worried as this was my first pregnancy, but I was also nervous because I had to deal with a lot of stigma behind me being a pregnant man. But alongside receiving rude comments from other people, the pregnancy took a lot for me emotionally.”

“Having a physical baby bump was something so feminine that messed with my head. But it was all worth it to have Rowan and to become a father – I wouldn’t have changed a thing.”