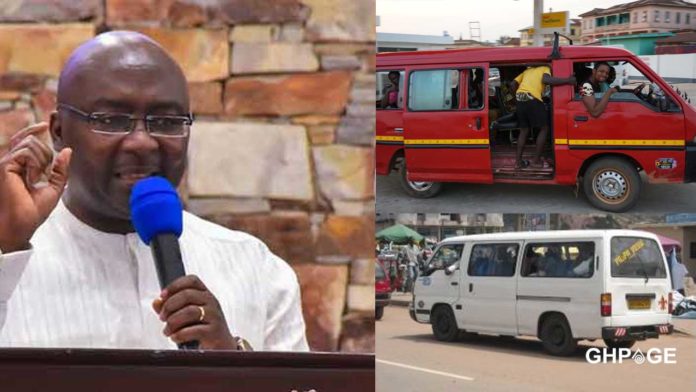 Ghana is going digital this was revealed by the vice-president of Ghana Dr. Mahamudu Bawumia some few months after the came into government to handle the affairs of the country.

And as such they have migrated a lot of things to digital from the usual paper system.

Well, Dr. Bawumia has once again come out to reveal that come 2020, commercial cars known to many as ‘trotro’ would go digital to help passengers know if the cars are properly insured or registered using their phones before they board them.

Speaking at a reception on Wednesday December 11, 2019 organised by the National Insurance Commission ( NIC), the Vice President explained that databases of the NIC and the Driver and Vehicle Licensing Authority( DVLA), will be integrated and synchronized so that individuals can check which vehicle has been registered or insured by keying in some details of the vehicle in question.

“…the database of the National Insurance Commission (NIC) and the Driver and Vehicle Licencing Authority (DVLA) will be integrated and go live in January 2020 to complete another plank of the Digitisation Agenda of the Nana Addo Dankwa Akufo-Addo administration,” he stated on social media after the reception.

He added that beyond helping passengers to crosscheck which vehicles were operating legally, it would also help to plug loopholes that allow for revenue leakages by helping detect fake registration details, through which vehicle owners evade paying insurance revenues to the state.

“The motor database will also help to stop the leakages from the insurance revenues through fake motor insurance stickers,” Dr Mahamudu Bawumia stressed.

The Vice President has been at the forefront of the Akufo-Addo’s digitisation agenda, which is a major tool, according to the government, in the fight against corruption.

Part of the text culled from mynewsgh