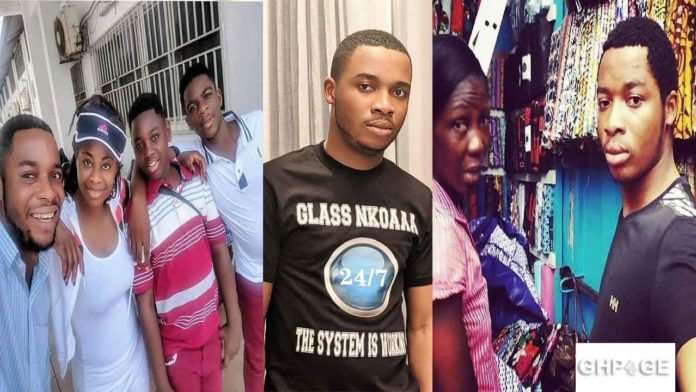 In the photos, Twene Jonas posed with his beautiful siblings and in another photo, was in a clothing shop with a woman believed to be his aunty.

These photos dropped after he rained insults on the Asantehene and other chiefs over their involvement in galamsey activities which has destroyed our water bodies.

However, a woman believed to be the sister of Twene Jonas has reacted to the viral photos.

In a post on social media, the woman confirmed that Twene Jonas is her younger brother and those pictures were taken before he relocated to the United State of America.

She also reiterated her brother’s words by entreating the leaders of the country to put an end to galamsey and protect our water bodies.

“Yea Twene Jonas is my little brother. Pictures taken shortly before he relocated to the United State where he calls “Heaven on Earth” Glass Nkwoa. Truth will always defeat lies. Forces of nature will always defeat forces of darkness. Keep our river bodies and our land clean the way our ancestors gave it to us”, she wrote.

Twene Jonas has been trending for a few days after some traditional leaders in Bechem rained curses on him for insulting the Asantehene, Otumfuo Osei Tutu II.

The traditional leaders were seen in a video, pouring libation over a slaughtered goat, invoking curses on Twene Jonas.

The social media sensation was asked to apologise to the Asantehene or face the wrath of the gods but it seems that order has fallen on deaf ears.