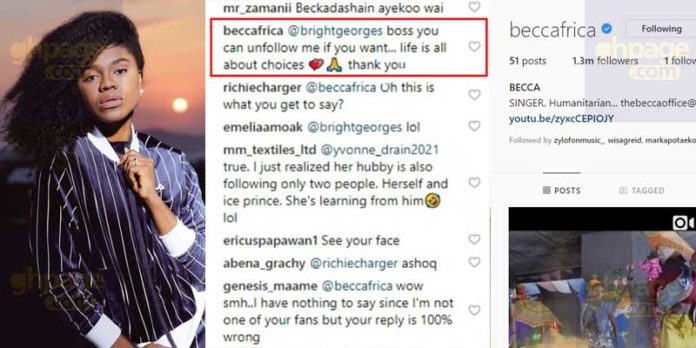 Ghanaian songstress, Becca has angrily reacted after her fans furiously descended on her after she made a decision to unfollow everyone on Instagram.

For reasons only known to her, the ‘African Woman’ hitmaker unfollowed her previously tall list of following, except her husband.

This list even includes her boss, Nana Appiah Mensah of Zylofon, Nana Ama McBrown, Yvonne Okoro, Zynnel Zuh, Sarkodie, and many others.

In a new video she posted to promote a new song she has produced with Patoranking, Becca urged her fans and followers to download the music and share it far and wide.

But instead of reacting positively to her request, some of the fans have asked Becca to go and play the song for her husband to listen.

Read some of the comments by her followers below…

i_am_me_naa: “You unfollowed everybody except ur hubby and u want us to hype your song for u…. Go and play it for ur husband alone nonsense @beccafrica.”

brightgeorges: “I Dnt get it…. y ya get 1.2 million followers and u follow only one person.. sometimes follow ur fans.. it make their day and keep them addicted to everything you do.. @therealfunnyface follows me tho.. I luv that guy die…”

henry_1star: “We miss the old Becca we know. I think most of your fans are little disappointed in you. We don’t enjoy your song like before.”

wealthyvs: “@i_am_me_naa let’s just unfollow her too. These entertainers think they are better than everyone else. Nonsense.”

productioneventsmedia: “U unfollow everyone n following ur husband alone. Y don’t u play ur song to him alone and hype it to him alone. @becafrica . I use to like u but u have change from the dove I know into a vulture I see on the gutters.”

But in a quick response to one of the comments, Becca emphatically stated that her fans can choose to unfollow her accordingly like she did. To her, life is all about choices, therefore, everyone can freely choose from alternatives.

See the screenshot below… 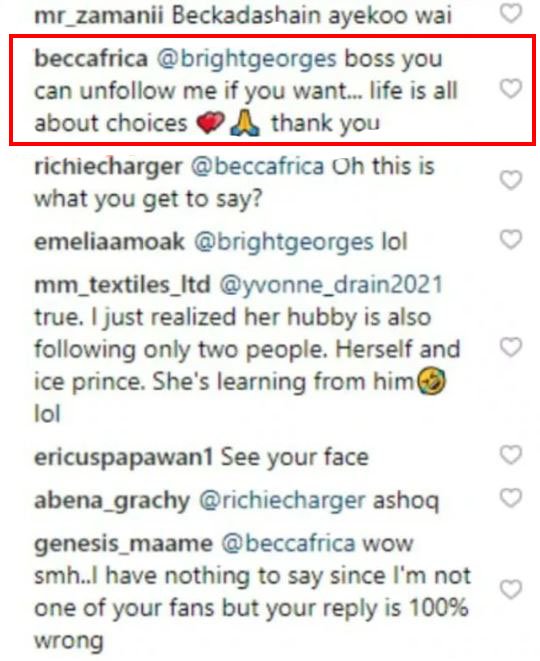 Share
Facebook
Twitter
WhatsApp
Previous articleKofi Adomah’s resignation from Adom FM is part of his illuminati role – Evangelist Addai
Next article“I am a big fan of Sarkodie, I fought a colleague because of him” -Sista Afia reveals