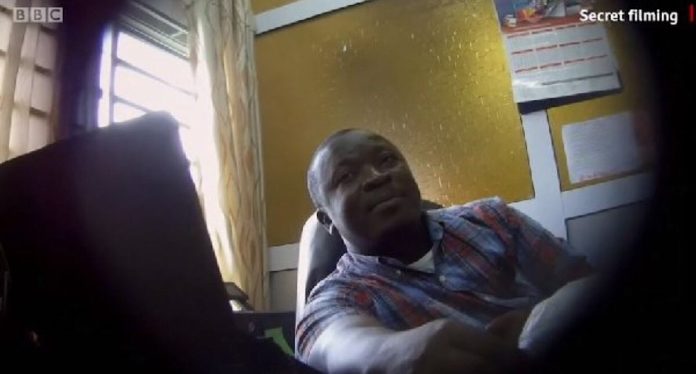 BBC Africa Eye recently announced that they were set to premiere an investigative piece dubbed “Sex for grades”. The investigations for this documentary were conducted by undercover reporters across some notable universities in West Africa.

Lecturers from prominent universities such as University of Lagos, University of Ghana amongst others, were caught in the act of seeking sexual favors from female students in order to award them grades or academic help.

This scandal is sure to severely shake the academic sphere as several big names have been entangled in BBC Africa Eye’s net. One of such lecturers who has been fingered in this investigative piece is University of Ghana’s Dr. Paul Kwame Butakor.

Dr. Paul Kwame Butakor is a lecturer at the Department of Teacher Education of the School of Education and Leadership in the University of Ghana.

He was captured on tape trying  to seduce a BBC undercover journalist who approached him as a prospective applicant to a Master’s Degree programme in his Department.

Dr. Butakor informed the young lady that his wife had travelled out of town so he was very available to be intimate with her in order to aid her with her Master’s application. He pleaded with her to accept him as her side piece as he wasn’t a needy person who needs so much attention so the relationship. He hinted that the relationship would be very beneficial to the both of them.

In the video, he was heard pleading with the undercover reporter saying;

“Maybe you’ll be my side and I’ll also be your side. Because me, I’m married…my wife is not in the country though…my wife is out of the country“

“You look muwaah…how many guys have told you ‘You are beautiful’ today?” .

This incident happened when the undercover reporter approached Dr. Butakor to seek advice regarding her Master’s degree application as she supposedly wanted to further her education in his department.

This is only a snippet of the undercover piece by BBC dubbed, Sex For Grades. Several other lecturers have been implicated in the investigative piece. The full video is scheduled to be aired on BBC Africa’s YouTube channel today at 6PM

Keep visiting this portal as we bring you prompt updates as the story develops.