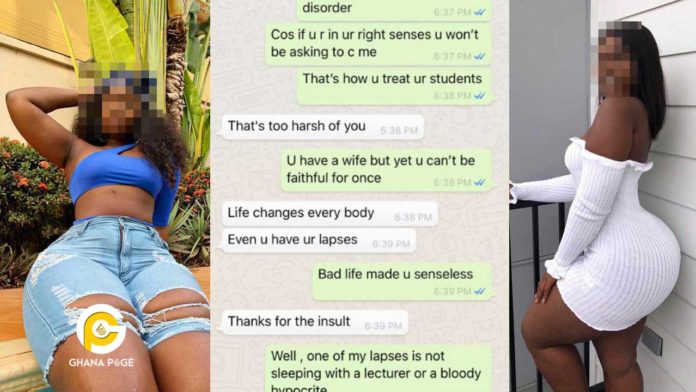 A female Nigerian University student called Busayo has exposed a lecturer who has been harassing her for s3x by sharing a screenshot of their chat on Whatsapp on social media.

In the chat, the lecturer identified as Dr. Abdul was pleading with Busayo to visit him in his house. When she responded angrily, he resulted to pleading with her for forgiveness.

SEE ALSO: Kweku Baako narrates how BBC approached Anas to work on S£x for grades exposé and why he refused the request

“I really don’t think you deserve all this. Stop being like this. Seeing you is for just to beg for your forgiveness. Not good to sound this way”, Dr. Abdul pleaded.

Interestingly, Dr. Abdul is a married man and Busayo did not spare him at all when she pointed it out to him to respect his wife.

She vowed to deal with him the next time she comes to him again with the offer of sex for grades. It is heartbreaking reading the chat.

Sex for grades in some universities in Ghana has received major attention after BBC Africa Eye led an investigation to uncover the problem.