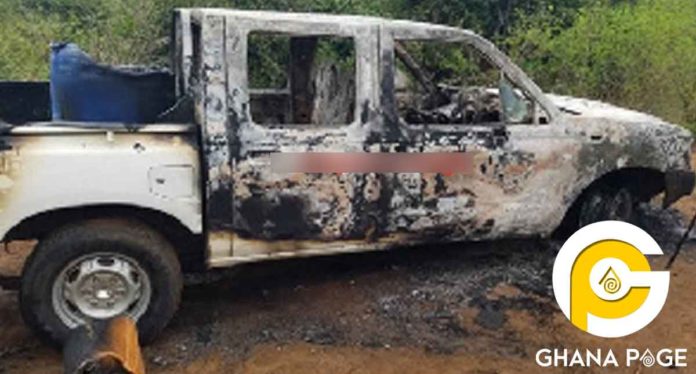 Ghpage.com has sighted a sad story about the gruesome murder of a family of three. The trio were killed and burnt in Tsopoli and town near Prampram in the Greater Accra Region.

The bodies which have been identified as Oman Kwaw Koranteng the husband, his wife, Sophia Kpotogi Daale and their son, 3-year-old son Oman Akuaku.

The trio were attack and brutally murdered by unknown armed assailants on their way to fetch water in their Nissan Hardbody Pick-up vehicle.

He added that the police have began looking into the incident. He assured that the suspects would apprehend and brought to book. He noted that members of the community are however not offering full cooperation in order to quickly apprehend the culprits.

“The bodies have been burnt beyond ashes so we are unable to recognize the deceased persons. The villagers are not willing to cooperate with us. They were ambushed and shot dead and burnt the wife, husband and their 3-year-old child. They were going to fetch water….they rear cattle there and they use to fetch water in the area at the sea nearby. While they were going the people laid ambush and they were shot and later burnt to death”