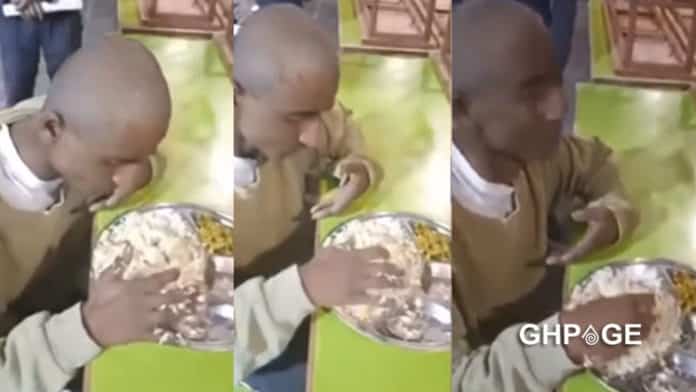 A man believed to be an inmate on death row has moved many social media users to tears following the emergence of a sad video of him eating his last meal.

In the circulating video, the prisoner’s hands are seen trembling as he struggles to eat the special food he requested before his execution, which appeared to be rice and beans.

With the fear of death written all over him, he looks to his sides intermittently to watch officers who had flanked him waiting to take him away.

Watch the emotional video below

Inmates who are on death row are considered to have committed gruesome crimes that are unforgivable in the court of law and are penalized with a death sentence.

We cannot verify the source of the video, however, the heartbreaking footage has stoked many reactions online.

Many social media users have expressed sadness and wondered whether the alleged convict had an appetite for the food or if he was just eating for the sake of it.

Check out some of the reactions sampled below

cephas_stone wrote: This is the saddest video I’ve ever watched in my entire life

dara_ximi: My mood just changed after seeing this

saywitty: What’s the essence of the food abeg

baddest_landlord: No one is ready to die

shugaadaeze_: I feel pity for him . Y’all should stop doing bad things abeg