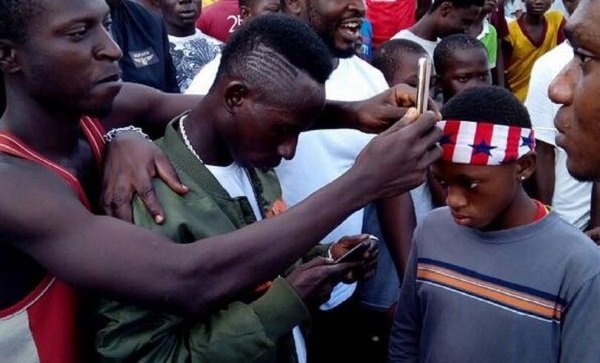 The manager of Patapaa Amisty, the One Corner Hitmaker, Godfred Bopkin has revealed that the fame obtained by the Swedru based artist has entered his head and he has not only become indiscipline, he has become too difficult and he will leave him to his faith if he does not change soon.

According to the artist manager, their outfit is losing huge sums of money due to the indiscipline attitude of Patapaa. Recently, they lost a GHS250,000 deal because of this same stinking behaviour.

Godfred Bopkin revealed in an interview that, Patapaa cancels shows he has been paid to perform without any reasonable reasons, he cancel business meetings by heart. In fact, he is completely losing it and worse of all, he has surrounded himself with a gang who has no idea what they are doing.

Meanwhile, One Corner hitmaker, Patapaa Amisty has rubbished claims by his manager, Godfred Bokpin that the fame he is enjoying in recent times is destroying him.

Speaking in an interview with Adom TV on Friday, Patapaa stressed that he has no brawl with his manager hence he cannot fathom why his manager will say such a thing.

READ ALSO: Video: Rashida Black Beauty’s pregnancy; This is what Kushman, the guy responsible has to say

According to him, his manager paved the way for him to keep up with his career.

Patapaa added that it is through Godfred Bokpin that he got the opportunity to feature in the latest Mr Eazi’s ‘Akwaaba’ song.

“We don’t have a problem. He was the one who paved the way for me. I have heard the issue but I don’t have a problem with him. It is through him that I got the Mr Eazi collaboration. This is little fame as I hope to go beyond this in my career…” he maintained.

READ THIS: Video: This is how Countryman Songo reacted to his sacking from Multimedia

He, however, urged his fans to vote for him in the upcoming Vodafone Ghana Music Awards happening in April and insisted they look out for his new song dubbed “Kumchacha”.

Patapaa Amisty further revealed that he will be collaborating with Ghanaian Hip-hop rapper, Kwaw Kesse in no time.

READ THIS TOO: Top 5 Reasons Why You Can Never Break Up With An Ewe Lady— Number 4 Will Shock You