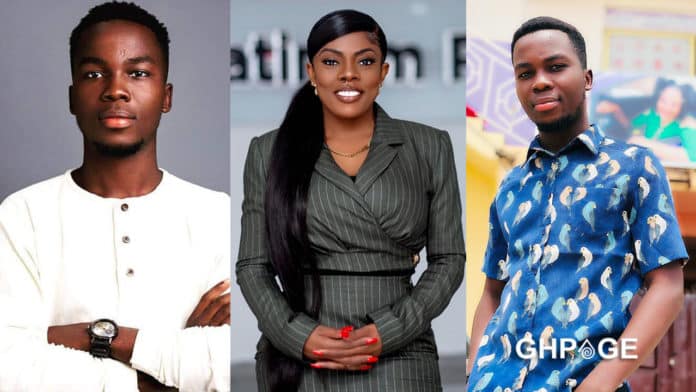 A blogger with GHBase.com, Journalist Albert, known popularly as Bongo Ideas on social media, found himself wanting after coming face-to-face with Nana Aba Anamoah, Serwaa Amihere and Bridget Otoo at the studios of GHOne TV.

Apparently, the blogger, who is notorious for abusing people on the internet space had denigrated all three of the TV personalities, including actress Lydia Forson on Twitter without any regard for their feelings.

However, he had the balls to show up at the auditions for the “Next TV Star” over the weekend, with Nana Aba Anamoah, Serwaa Amihere and Bridget Otoo as judges screening potential contestants.

In a video posted on Nana Aba’s social media pages, it was revealed that the troll couldn’t even defend himself when he met the three journalists in person after they retrieved olds tweets from his own Twitter page showing how he spews harsh words at people.

A stern-faced Nana Aba asked the “keyboard warrior” to be bold enough and tell her all that he has been posting on Twitter about her and others, but he was captured fumbling to utter words from his mouth.

The highly opinionated blogger quizzed why he should kowtow to the demands as he also refused to apologise to the three personalities.

He was chastised, berated and told to walk out of the premises with his head bowed down in shame.

The video has since gone viral with several people including Lydia Forson bashing him for his posts on Twitter.

Watch the humiliating moment below