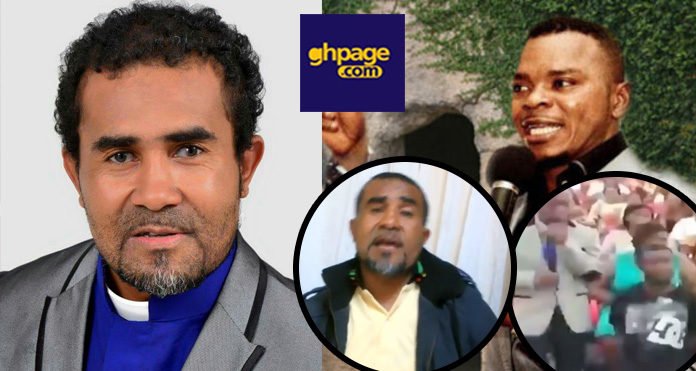 They say wonders shall never end and Founder of International God’s Way Church, ‘Angel’ Obinim seems to enjoy the stardom and the tomfoolery that happens in his church every day. He just does the unthinkable if I should say that.

READ ALSO: I Have $£x With My Son Every Wednesday To Maintain His Wealth – 52-Year-Old Woman Confesses

One of his supposed miracles that took social media by storm was his sticker challenge. The trend is based on hilarious and outrageous claims people are making on and they are attributing it to a miraculous sticker belong to Bishop Daniel Obinim, the founder, and leader of International God’s Way Church.

A video also circulated online where Obinim was seen receiving applauds from his congregation and for some reason, he is dressed as a woman, with a wig on in which he makes some creepy head motions – we assume he’s copying a girl who has on a new wig.

The ‘controversial’ Bishop Daniel Obinim once made headlines by asking the members of the Tema Branch of his church to bring some items for prophetic direction.

A top American TV station once mocked Obinim over his supposed miracle which is said to increase the genitals of men in his congregation. Like seriously?

A video also emerged online showing the Leader and Founder of the International Godsway Church Bishop Daniel Obinim leading his congregation in Islamic prayer rituals in his Church, to the extent of chanting ‘Allahu Akbar’ after the prostration in Muslim-like formation.

One man of God who is based in Nairobi, Prophet Dennis is the general overseer of Great Unction Worldwide Chapel, Nairobi has rubbished the said miracles of Obinim claiming it’s all fake.

According to the prophet, he claims Obinim is fake and using strategies to deceive people and that he is possessed by an evil spirit.

He claims to be a close friend of Obinim in their early days.

“I know Obinim in Kumasi Asewase. I have slept in the same room with him, prayed with him. We know ourselves very well, and his wife too. I know the genesis of his ministry. I know his spiritual father. Obinim was a genuine pastor when I knew him. He was humble and full of humility,” he said.

He played some videos of Obinim performing some miracles and drew out the deception in them claiming a supposed angel does not do such things. He based most of his claims on the scriptures.