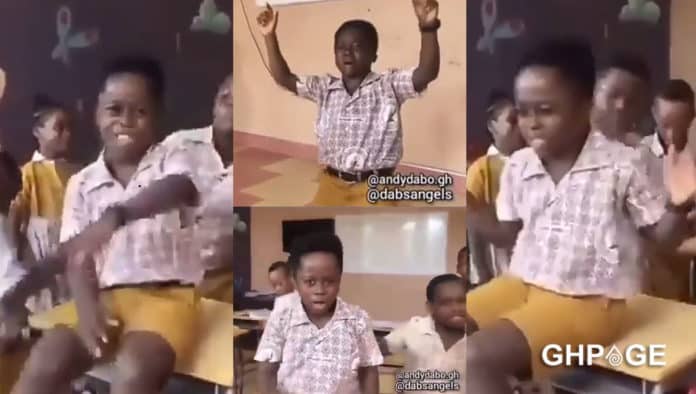 A primary student, whose said to be 7-years-old, has taken the Ghanaian internet space by storm by exhibiting his lyrical abilities in a video that has widely been circulated on social media.

The video which appears to have been recorded premeditatedly for entertainment purposes sees the primary pupil singing the lyrics of Black Sherif’s ‘Second Sermon’ song word-for-word, to the admiration of his mates who acted as backup vocalists and dancers.

After he finished with the first verse of the song which was delivered with so much dexterity, his teacher walked in on him unexpectedly and punished him for his misdemeanour.

Even when he was asked to kneel down with his hands raised, he was still in the groove, rapping all the other verses of the song to the amazement of netizens.

This is coming less than 24 hours after Oswald – a 9-year-old pupil of the Christ Ambassador School in Dansoman – enjoyed a nationwide spotlight on Friday after his tall list of ‘Our Day’ items penned to his mother surface online.

Black Sherif’s ‘Second Sermon’ which was released about a week ago has arguably become one of the tracks on the playlist of many music lovers in the country.

In addition to enjoying massive attention, the visuals for the song has crossed over 2 million views on the video-sharing platform, YouTube.

We hope Black Sherif himself will fall in love with this boy who is obviously his biggest fan.