Video: Watch what happened when Shatta Wale tried to perform his diss song to Stonebwoy at Zylofon Cash Activation Concert in Aflao 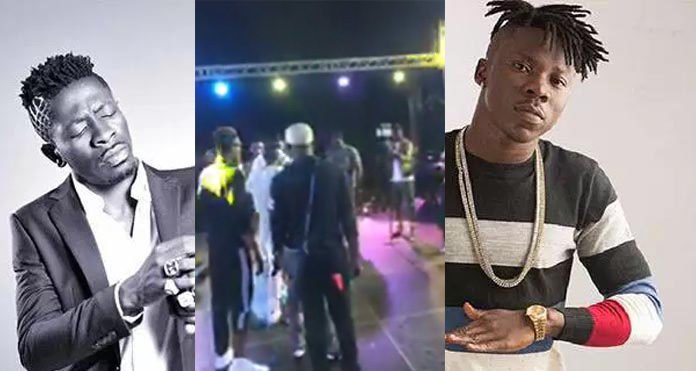 Ghanaian Dancehall heavyweights Stonebwoy, Shatta Wale were billed by their record label Zylofon Media and other acts signed under the same label would on Easter Sunday to shut down the Volta Regional town of Aflao with a mega concert.

READ ALSO: Video: This is how Countryman Songo reacted to his sacking from Multimedia

But Stonebwoy on the Dday boycotted the show. Initially, there were rumours that he wouldn’t show up and true to the rumours, the Bhim Nation Boss did not show up at the Zylofon Cash Activation Concert in Aflao yesterday where he has his biggest fanbase.

Well, according to information gathered by Ghpage.com, the “Hero” hitmaker, Stonebwoy did not show up because of the ongoing feud between him and his record label, Zylofon Media the official sponsors of the Zylofon Cash Activation Concert.

READ ALSO: Someone Must Pay For Ebony’s Death – Sefa Kayi

But the self-acclaimed Dancehall King, Shatta Wale was there to give his energetic performance. During the performance, he tried performing one of the diss songs he made for Stonebwoy and before he could actually get into it, the lights went off(Obviously some diehard fans of Stonebwoy tempered with the meter but it was fixed quickly) Shatta Wale went on to give one of his best performances in history.