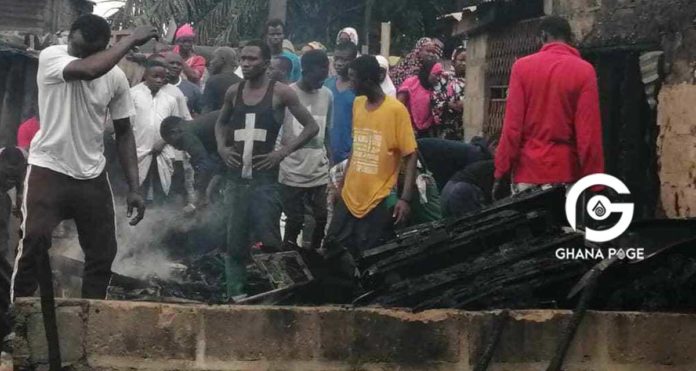 There is a violent clash between two factions at Damgombaline at the Asokore Mampong Municipality in Kumasi, Ashanti Region over a piece of land, Ghpage.com.

As at now, 7 people have severely been wounded with machetes and have been sent to the Manhyia Government Hospital for treatment. 2 buildings, as well as a makeshift structure, have been burnt to ashes.

SEE ALSO: Father beats his less than a 2-year-old daughter to near-death

According to a report on 3news.com, the attack was triggered by an attempt by one of the two factions to pull down properties on the disputed land belonging to the other faction. That was fiercely resisted leading to the pelting of stones and what could be described as a free for all fight among the feuding factions.

“A police team called in to restore calm was caught in the cross-fire as the officers received their fair share of the stone pelting,” our correspondent said.

SEE ALSO: Friends and family weep as a Ghanaian lady dies on her wedding day

Immediately after the police left the scene, the two buildings and the makeshift structure serving as a house were set ablaze, destroying properties estimated to cost thousands of cedis.

Some residents have also started fleeing the area which is under the Asokore Mampong municipality for fear of reprisals, our Ashanti Regional correspondent Ibrahim Abubakar reported.

The police after the assault on them is yet to return to the area after the buildings were burnt down, according to reports gathered by Ghpage.com.