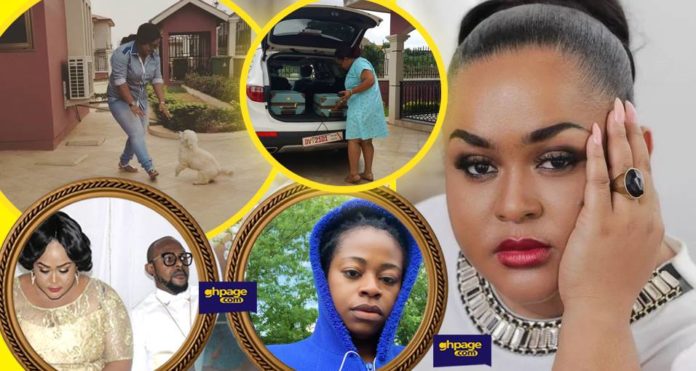 Renowned Kumawood actress Vivian Jill Lawrence has reacted to claims that she snatched someone’s husband based in Canada— where the man allegedly even sold his house in Canada and used the proceeds to build Vivian Jill’s house for her.

According to Vivian, it was never true and has not even stepped her foot on a Canadian soil despite securing a visa on three different occasions.

Vivian’s reaction follows after a certain Frema, in a video, described Emelia Brobbey as a thief who stole from a shop in London which became a subject of discussion in Ghana.

She also went ahead to claim that Emelia Brobbey is a cheap girl who gave birth to her first child during her secondary school days and up until now does not know the father of her kid because almost all the men in the school slept with her.

Also, Frema aka Cocoa Butter Broni claimed, Emelia’s last born was rejected by the man who is said to have impregnated her because so many men were sleeping with her by then and the man also accused her of thievery.

READ MORE: “Frema has touched my heart and my eyes” – Emelia Brobbey reacts to Frema’s attack on her person, claiming that She is a thief, drunkard, and a prostitute (Video)

According to Vivian, she does not understand why people always spread false rumors about them and mostly what they even gossip about is not even true.

In a radio interview and as monitored by GHPAGE.com, the mother of two boys added that God continues to strengthen them through it all.

READ ALSO: Photos: Kumawood actress, Vivian Jill Lawrence shows off her cars, house, and other properties—Also reveal she is one of the richest actresses in Ghana

“Those who talk about us, have they seen it? Where is the proof of what they keep writing about us?

“They once wrote that I have gone to snatch someone’s husband from Canada and the person sold his house in Canada to build a house for me in Ghana. Meanwhile, I have secured a Canadian Visa three times but have not been there before — But someone sat down to write such a false story about me” Vivian Jill stated.

Also, Vivian Jill Lawrence’s First Son, Clinton Prempeh is all grown up — Drives One Of The Porsh Cars In town And Is Living The Dream Life Of Every Teenager(Photos+Video)