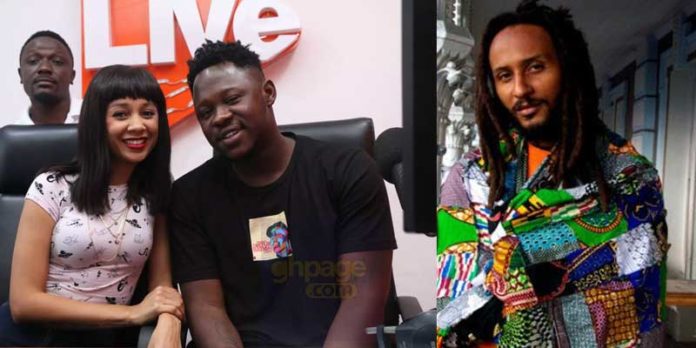 Brother of Sister Derby, Wanlov the Kubolor have openly reacted to Medikal’s breakup with his sister and the saying goes; “blood is thicker than water”, he’s solidly behind his sister.

His brother who kept mute over the issue for some time has started tweeting and retweeting anything related to Kakalika Love song challenge; a diss song meant for Medikal and Fella Makafui.

Wanlov who also seem hurt by Medikal’s action yesterday took to his Instagram page to throw a subtle jab at Medikal; calling him someone who intentionally toy with people’s feelings because he enjoys seeing them squirm.

“do u intentionally toy with peoples’ feelings coz u enjoy seeing them squirm? ?“, Wanlov quizzed.

do u intentionally toy with peoples' feelings coz u enjoy seeing them squirm? 🙃 Listen to my verse on "Saint Beryl ( @beryl_st ) & @Wanlov the Kubolor – kWeSi" u can find it on youtube/itunes/spotify… styled / design by @stevefrenchofficial_ @steviefrenchie dir/pr/edit: kubolor cini shot: @fotombo hair/makeup: @thekabukiii #acoustic #ghana #accra #fashion #vogue #arkhamasylum #mentalhealth #mentalhealthawareness #abusiverelationship #abusiverelationships #godinguitars LYRICS: hmmm the problem is u 4get i am kojo work at ankaful married to adjo u've been my patient past 4 mnths av been so patient no more chance will increase yor dosages so u comply my whatsapp messages delete it wai pim pim pim pimpim pim don't want any evidence left

Read this: Medikal and Sister Derby’s breakup caused by a text message from Fella?

Medikal since his breakup with Derby has released two diss song; the latest one titled “Open Letter” aimed at exposing Derby and her antics with Lydia Forson.

Wanlov who was in support of Medikal’s relationship with Derby said somewhere last year that he’s a big fan of Medikal and that he likes his music.

“The composition is ordinary, I like his music, we have the normal boys-boys talk and I shot a video for him as well. I think he is the silent type of ‘akonta’ [brother in-law]”

“Before my sister got together with him, I was listening to his song Connect and I was going crazy on that song.”

Read more: Medikal explains why he fell in love with Makafui after 5yrs of Friendship

“I have fun always watching them Snapchat, meeting them, they are always laughing together and joking. He [Medikal] is a very business minded person and so they push each other to excel.”

“I have always said that age is nothing but a number, apart from looking very young, she’s very playful, young at heart so until she releases her age you won’t even know. The police normally request her license,” he said.