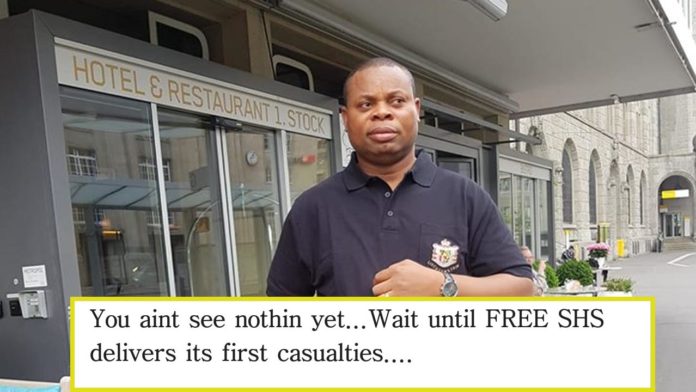 Franklin Cudjoe the President of IMANI AFRICA a policy think tank in Ghana, has said that if Ghanaians are worried about the news of the failure of significant percentage of WASSCE candidates in Maths and English in this year’s exam, they should wait to see, in his words, “the first casualties of Free SHS”.

The West Africa Examination Council (WAEC) Friday released the results for this year’s WASSCE examination and revealed that performances in this year’s Mathematics and English Language fell below 2017 standards.

According to WAEC, based on the provisional results released Friday, the performance at score range A1 – C6 in Social Studies showed a marked improvement over that of 2017 (52.25% to 73.27%), while Integrated Science also recorded a slight improvement (43.66% to 50.52%).

Also Read: Married woman recounts how her husband allows her to sleep with wealthy men for money

The results for the English Language also suffered a drop, recording only 46.79 percent over the 2017 performance of 54.06 percent.

Upon hearing the news Mr. Franklin Cudjoe took to his social media page to talk about students under the free SHS policy.

Source: Oh, I was tasked to share it with you.

. Seriously we are sitting on a dangerous atomic bomb. IMANI will return shortly to this Free SHS plague.” He added. 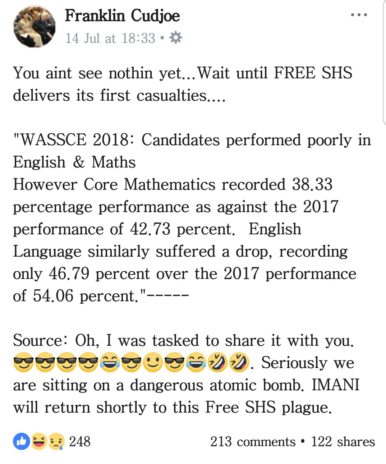 SEE MORE: Headmaster in “Kitchen stool” sextape admits having sex with his student