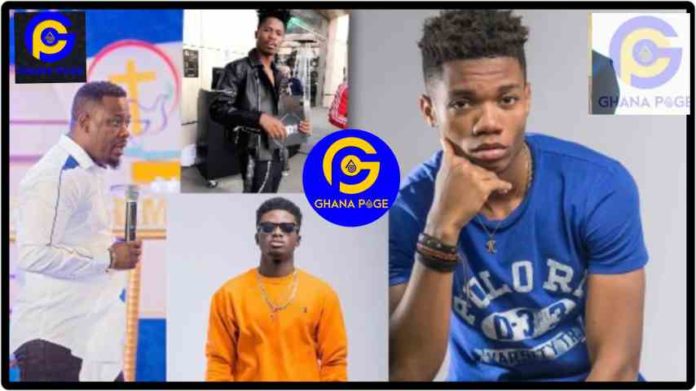 Lynx Entertainment signees, Kuami Eugene and Kidi together with Groud Up Chale superstar, Kwesi Arthur on December 31 received prophecies from the founder and leader of True Word Prophetic Fire Ministry, Prophet Nigel Gaisie  said that they are going to having a bad year.

In a video circulating on social media, the Prophet was captured while he was preaching to his congregation.

The Prophet was heard saying, “personally I don’t know these people. The Lord came to me and the Lord told me to tell these people” he said.

Read Also :Hilarious scene when Owusu Bempah’s gateman fled in only a towel around his waist

Commenting on the prophecy in an exclusive interview with Mzgee of Joy News, Kidi disclosed that the prophecy has really affected them psychologically and physically thus making them to live in fear.

Though Kuami Eugene disclosed earlier that they were unperturbed with the man of God’s prophecy because they pray a lot and have lots of pastors interceding for them, Kidi in an honest presentation disclosed how worried they have been since the prophecy.

Kuami Eugene expressed his disappointment in Prophet Nigel Gaisie for not reaching out to them about the prophecy privately but went ahead to make it public causing tension among their fans.

SEE ALSO :Here are the top ten highest-grossing movies of 2018 and how much they made