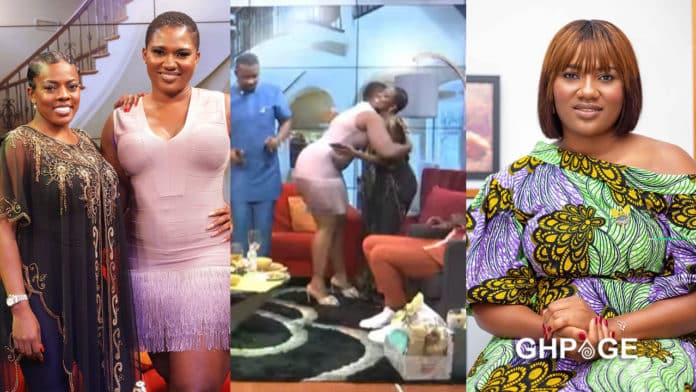 At long last, Abena Korkor can breathe a huge sigh of relief after fulfilling one of her greatest wishes in life after grabbing a once-in-a-lifetime opportunity she has been waiting for for a long while.

On Saturday, Abena went to the studios of UTV to meet Nana Aba Anamoah, when the latter appeared on the weekly entertainment programme, United Showbiz, as a guest.

Her mission there was to apologise to Nana Aba, who is also the General Manager of GHOne TV, for some utterances and posts she made on social media that may have brought her image into disrepute.

The two smoked the peace pipe after Nana Aba Anamoah stated emphatically that she had forgiven Abena Korkor for offending her and her goddaughter Serwaa who she also accused of sleeping with high profile politicians in the country.

They capped off their reunion with a hug at the end of the show to cement their renewed friendship.

See the video below

Abena, who claims to have turned over a new leaf, vowed never to go back to her old ways again and later blame it on the relapse of her Bipolar – a condition that triggers her to become open about all her secrets.

Nana Aba Anamoah, while reacting to Abena’s bold move, said she had forgiven her accuser and doesn’t hold any grudges against her anymore despite the destruction she’s caused with her false statements on social media.

She, however, noted that she will hold Abena Korkor to her assurance of becoming a better person and wouldn’t repeat the same mistakes again in the future.