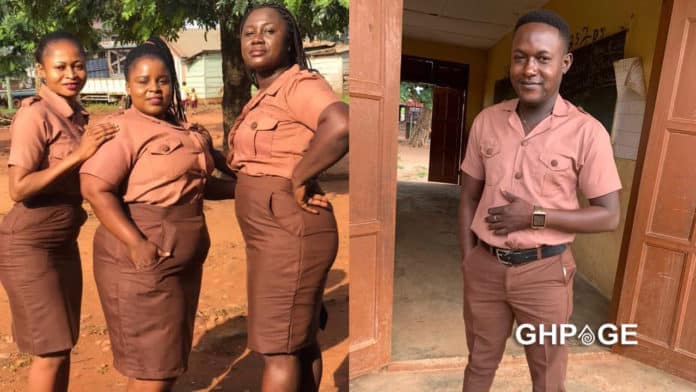 Social media was thrown into a frenzy on Sunday after photos of some Ghanaian teachers modelling in what looked like professionally tailored uniforms went viral.

It was alleged that the new uniforms are a Ghana Education Service (GES) policy aimed at giving the teaching profession a facelift.

The unconfirmed reports have infuriated many Ghanaians who have chided the Service over what they deemed as a useless initiative considering issues plaguing the education sector.

However, one of the teachers in the viral photos identified as Sylvia Yeboah has clarified that the uniforms were sewn by themselves and not GES as speculated.

In a Facebook post, she said: “Please the news about the uniform is fake news and anyone who comes across it should disregard it the uniform was a self-initiative by us and not by GES. Thank you”

Sylvia on Monday disclosed to Asaase Radio that the initiative was a decision taken by four female teachers of the Akwasease Methodist Primary School in Tepa to inspire their pupils to aspire to become teachers in the future.

She disclosed that the campaign started over a year ago and the pictures in circulation were taken around September 2021.

Social media reactions to the photos reveal how many do not buy the idea. For many, there are several issues plaguing Ghanaian teachers which should be given rapt attention, not uniforms.