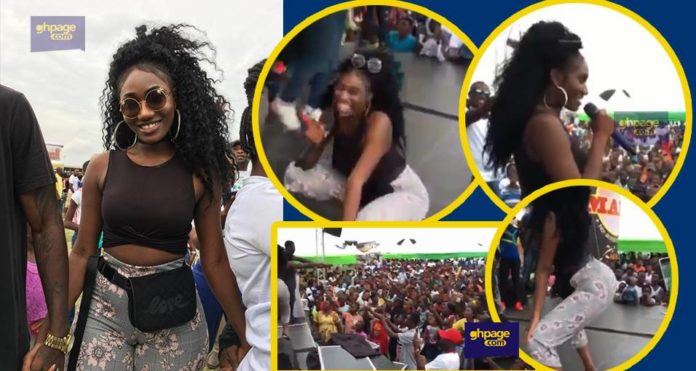 The artiste touted to replace late dancehall sensation, Ebony Reigns, one can anticipate the expectations from his first stage appearance — considering the great performance Ebony offered us while she was alive.

Wendy, dressed in a black sleeveless top matched her loose but buttocks fitting trousers took the stage to perform his only one hit song, uber driver.

She got the crowd entertained amidst some cheers and singing along. Interesting to note that, on the course of the performance, she tried some ‘shaku dance moves’ and some twerking which looked weird I must say.

Nonetheless, her ‘physical assets’ seemingly helped her one too many times as the crowd couldn’t stop cheering up when she tried winding it.

Wendy is a trained nurse but is currently doing music professionally.

She was born in Ghana, Kwahu, Eastern region but was raised in Stuggart, Germany. She claims to have been doing music all her life but her first record label is with Bullet’s Rufftown records.

READ ALSO: Wendy Shay opens up on how she met Bullet, her manager