2nd Video: What happened at Midland Savings & Loans after the police officer beat up the nursing mother

Second video of what happened at Midland Savings & Loans, after the police officer beat up the nursing mother 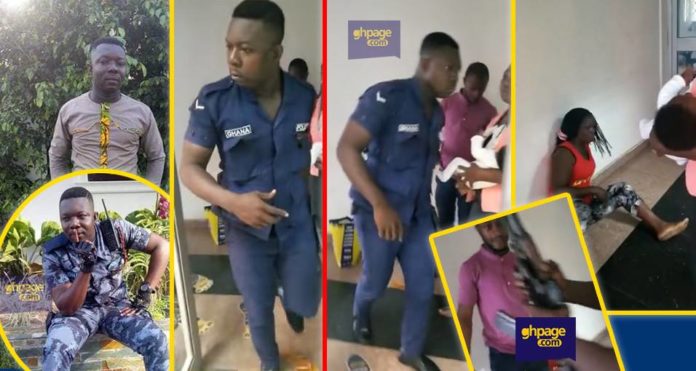 A police officer, Frederick Amanor aka Skalla assaulted a nursing mother at the banking hall of Midland Savings and Loans branch in Shiahie, Accra in a video which has gone wildly viral in the Ghanaian social media space.

He has been arrested and placed behind bars, following the order of the Inspector General of Police, Mr. David Asante Apeatu.

The IGP issued the order immediately after watching the video of the incident, which has gone viral.

GHPAGE.com has seen another footage which records after the Police officer in uniform had assaulted the woman with a baby strapped behind her.

In this second video, some workers at the bank were convincing the woman to go home and come for her money the next day.

The assaulted woman who looked distressed could be heard saying that she doesn’t even have money to go back home and then sat on floor whiles some of the workers continued to advise her.

The policeman then made another attempt to beat her up again and this time got stopped by the workers. He locked up the banking hall after a hard day’s work of beating a nursing mother. A sad day for Ghanaians to behold to such a barbaric act.

Meanwhile, Midland Savings and Loans has also reported the case to the police. Management of the financial institution has condemned the brutality which was “meted out to a customer.”

Commenting on the incident, the Minister of Interior, Mr Ambrose Dery said he called the IGP immediately after seeing the video and told him to take action on the matter.

He said it was unacceptable for a “policeman to be that hostile, to be so wicked, to be that barbaric to another woman.”

He said he has asked the IGP to look at the matter and deal with it immediately.

Social media users have also expressed disgust at the video circulating on Facebook.